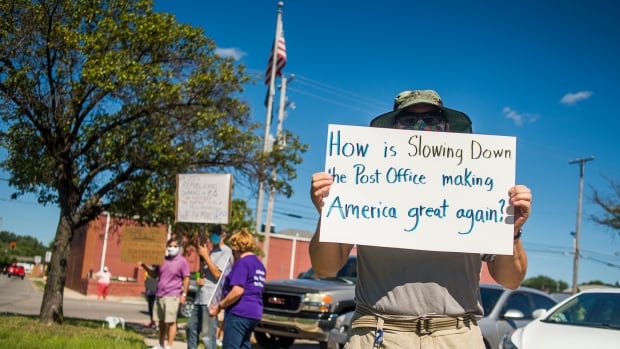 Funding for the U.S. Postal Service and to shore up election infrastructure became a major sticking point in congressional talks on coronavirus relief, as President Donald Trump on Thursday vowed to block any money to facilitate mail-in voting.

The Republican president has been railing against mail-in ballots for months as a possible source of fraud, although there is little evidence it takes place and millions of Americans — including much of the military — have used the post office to cast absentee ballots for years.

Trump said his negotiators have resisted Democrats’ calls for additional money to help prepare for presidential, congressional and local voting during a pandemic that has killed more than 166,000 Americans and presented severe logistical challenges to organizing large events like the Nov. 3 election.

The amount of money in question is less than 1 per cent of either party’s current proposed response, with Senate Republicans having unveiled a $1-trillion US response while the Democratic-controlled House of Representatives in May passed a $3-trillion bill.

Democrats have cried foul, accusing Trump and his party of trying to make it more difficult for Americans to vote, as opinion polls show him trailing his Democratic rival, former vice-president Joe Biden.

“I initially was hopeful this wasn’t an intentional effort to throw the election. I am gravely concerned given the recent changes in the leadership of the Postal Service that we’ve seen by the postmaster general, who I’ll remind you was a major Trump campaign contributor,” Democratic Sen. Chris Coons of Delaware said on MSNBC.

The ability to vote without going to a polling place is especially important this year as Americans look for ways to vote without risking being infected by the novel coronavirus.

Pelosi said any coronavirus relief bill should include billions of dollars to protect not just Americans’ right to vote but also essential services, like mailing prescription medicines, during the pandemic.

“The president has stood in the way of any money for the Postal Service,” Pelosi said on MSNBC.

As his poll numbers tank and the pandemic rages, U.S. President Donald Trump is sowing doubt about the credibility of the November presidential election by politicizing mail-in ballots. 2:11

Trump has repeatedly claimed without evidence that mail-in voting is likely to be rife with fraud. Experts who study elections say there is little proof that this is the case and there are battles playing out in several states whether the coronavirus can be cited by voters as a justification for voting by mail, even earning a “correction” by Twitter for one such claim.

Trump in the Fox interview again cited delays in a New York primary won by Carolyn Maloney. While the vote was plagued by delays and inefficiencies, there’s been no evidence of fraud.

Trump has also fixated on a Paterson, N.J., city council election in May where a councillor, a councillor-elect and two other men face criminal voting fraud charges in what was viewed as a complicated scheme. Subsequent statewide elections in New Jersey last month, with extensive voting by mail, did not lead to issues.

The president has not mentioned in his broadsides in recent weeks the case of a Republican congressman from Kansas who has been charged.

Trump and Attorney General William Barr, who has also expressed concerns about an expansion of mail-in voting, have each voted by mail in the past.

When the congressional Democrats and Trump’s negotiators last met in person on Friday, they were some $2 trillion apart in their negotiating positions. A Reuters/Ipsos poll this week showed that Americans blame both parties for the standoff, which has led to the expiration of a $600-per-week lifeline to unemployed people.

New Postmaster General Louis DeJoy, who has donated $2.7 million to Trump and his fellow Republicans since 2017, has ordered operational changes and a clampdown on overtime in a bid to fix the financially troubled Postal Service, which reported a net loss of $2.2 billion in the last quarter.

The Democrats have also asked DeJoy, the husband of incoming U.S. ambassador to Canada Aldona Wos, to testify before Congress next month.

Maloney on Wednesday introduced legislation in the House of Representatives that would seek to prevent the USPS from instituting operational changes until Jan. 1, 2021, well after the election.