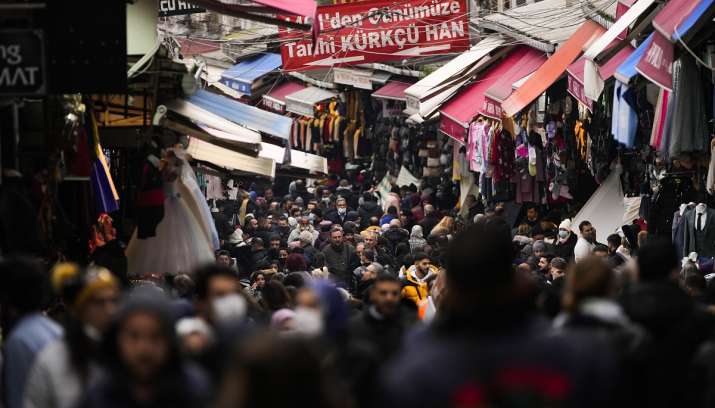 Turkey’s yearly inflation climbed by the fastest pace in 19 years, jumping to 36.08 per cent in December, official data showed on Monday.

The Turkish Statistical Institute said the consumer price index increased by 13.58 per cent in December from the previous month, further eroding peoples’ purchasing power. The yearly increase in food prices was 43.8 per cent, the data showed.

The yearly inflation rate was the highest since September 2002. Inflation has been rising in the country while the Turkish lira has been slumping to record lows after the country’s central bank — under pressure from President Recep Tayyip Erdogan — cut a key interest rate by 5 percentage points in September.

The weakened lira has made imports, fuel and everyday items more expensive and has left many in the country of some 84 million struggling to buy food and other basic goods. Many have been purchasing foreign currencies and gold to protect their savings.

Last month, Erdogan announced measures to safeguard lira deposits against volatility after the Turkish currency hit an all-time low of 18.36 against the dollar. The lira rebounded following the announcement but has since lost some of those gains. The lira depreciated by around 44% against the dollar last year.

Erdogan insists on lowering borrowing costs to boost growth, even though economists argue that higher interest rates is the way to tame soaring prices. Also on Monday, Erdogan announced that Turkey’s exports increased by 32.9 per cent in 2021, to reach “a record” USD 225.4 billion.

Addressing a group of exporters in a televised speech, Erdogan said the figure amounted to a 7.8 per cent narrowing of Turkey’s trade deficit. Turkey would revise its export target for 2022 to USD 250 billion, he added. Meanwhile, the independent Inflation Research Group, made up of academics and former government officials, put the yearly inflation rate at a much higher 83 per cent. It said consumer prices rose by 19.35 per cent in December compared with November.