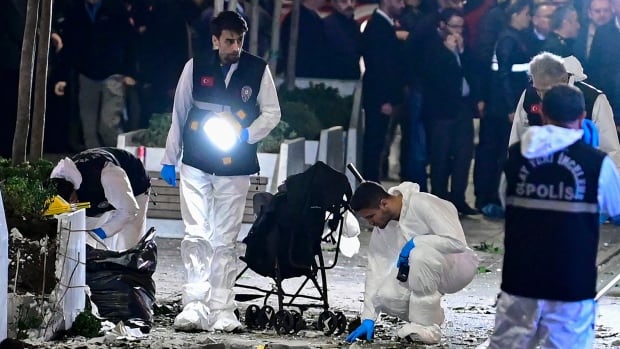 Turkish police said Monday that they have detained a Syrian woman with suspected links to Kurdish militants and that she confessed to planting a bomb that exploded on a bustling pedestrian avenue in Istanbul, killing six people and wounding several dozen others.

Six people were killed and several dozen others were wounded in Sunday’s explosion on Istiklal Avenue, a popular thoroughfare lined with shops and restaurants that leads to the iconic Taksim Square.

“A little while ago, the person who left the bomb was detained by our Istanbul Police Department teams,” the Anadolu Agency quoted Interior Minister Suleyman Soylu as saying. Police later identified the suspect as Ahlam Albashir, a Syrian national, who they believe was planning to flee to neighbouring Greece.

The Istanbul Police Department said videos from some 1,200 security cameras were reviewed and raids were carried out at 21 locations. At least 46 other people were also detained for questioning.

The suspected allegedly departed the scene in a taxi after leaving TNT-type explosives on the crowded avenue, police said.

Sunday’s explosion was a shocking reminder of the anxiety and safety concerns that stalked the Turkish population during years when such attacks were common. The country was hit by a string of deadly bombings between 2015 and 2017, some by the Islamic State group, others by Kurdish militants who seek increased autonomy or independence.

The minister said evidence obtained pointed to the Kurdistan Workers’ Party, or PKK, and to the Syrian Kurdish group the Democratic Union Party, or PYD, which Turkey says is the Syrian extension of the outlawed militant group. He said the attack would be avenged.

“We know what message those who carried out this action want to give us. We got this message,” Soylu said. “Don’t worry, we will pay them back heavily in return.”

Soylu also blamed the United States, saying a condolence message from the White House was akin to a “killer being first to show up at a crime scene.” Turkey has been infuriated by U.S. support for Syrian Kurdish groups.

In its condolence message, the White House said it strongly condemned the “act of violence” in Istanbul, adding: “We stand shoulder-to-shoulder with our NATO ally [Turkey] in countering terrorism.”

Turkish television broadcast footage purporting to show the main suspect being detained at a house where she was allegedly hiding. The woman is seen lying face down on a carpet, being handcuffed from behind.

9-year-old among the dead

The suspect, wearing a purple hoodie and black pants, is later seen being escorted to what appears to be a police interrogation centre.

Police searching the house also seized large amounts of cash, gold items and a gun, according to the footage.

Soylu said of the 81 people who were hospitalized, 50 were discharged. Five of the wounded were in intensive care and two of them were in life-threatening condition, he said. The six who were killed in the blast were members of three families and included a 15-year-old and a nine-year-old.

Istiklal Avenue was reopened to pedestrian traffic at 6 a.m. local time on Monday after police concluded inspections at the scene. People began leaving carnations at the site of the blast.

Mecid Bal, a 63-year-old kiosk owner, said his son was caught up in the blast and called him from the scene.

“Dad, there are dead and wounded lying on the ground. I was crushed when I stood up” to run, Bal quoted him as saying.

Restaurant worker Emrah Aydinoglu said he was talking on the phone when he heard the explosion.

“I looked out of the window and saw people running,” the 22-year-old said. “People were lying on the ground, already visible from the corner of the street [I was in]. They were trying to call [for help], whether it was an ambulance or the police. All of them were shrieking and crying.”

The PKK has fought an insurgency in Turkey since 1984. The conflict has killed tens of thousands of people since then.

Ankara and Washington consider the PKK a terrorist group but they diverge on the issue of the Syrian Kurdish groups, which have fought against the Islamic State group in Syria.

In recent years, Turkish President Recep Tayyip Erdogan has led a broad crackdown on the militants as well as on Kurdish lawmakers and activists. Amid skyrocketing inflation and other economic troubles, Erdogan’s anti-terrorism campaign is a key rallying point for him ahead of presidential and parliamentary elections next year.

Following the attacks between 2015 and 2017 that left more than 500 civilians and security personnel dead, Turkey launched cross-border military operations into Syria and northern Iraq against Kurdish militants, while also cracking down on Kurdish politicians, journalists and activists at home.

“In nearly six years, we have not experienced a serious terrorist incident like the one we experienced yesterday evening in Istanbul. We are ashamed in front of our nation in this regard,” Soylu said.

On Sunday, Justice Minister Bekir Bozdag told pro-government broadcaster A Haber that investigators were focusing on a woman who sat on a bench by the scene of the blast for about 40 minutes. The explosion took place just minutes after she left.

Turkey’s media watchdog imposed restrictions on reporting on Sunday’s explosion — a move that bans the use of close-up videos and photos of the blast and its aftermath. The Supreme Council of Radio and Television has imposed similar bans in the past, following both attacks and accidents.