Home Middle East U.K. to cap household energy bills over the next 2 years |... 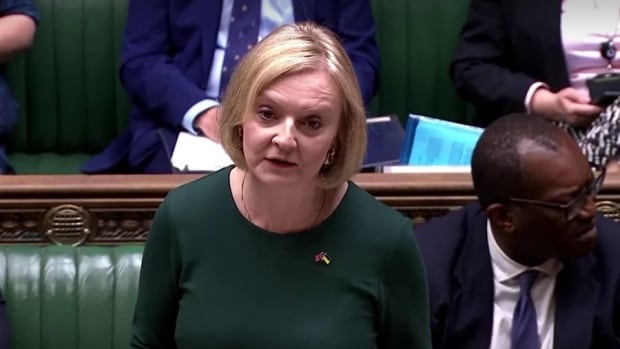 New British Prime Minister Liz Truss announced Thursday that her Conservative government will cap domestic energy prices for homes and businesses to ease a cost-of-living crisis that has left residents across the United Kingdom facing a bleak winter.

The moves are a huge government intervention in the economy by Truss, who sees herself as a small-state, free-market conservative. She says she favours tax cuts over handouts, but she has been forced to act by the scale of the crisis as Russia’s war in Ukraine has sent energy prices surging.

Truss also said she will approve more North Sea oil drilling and lift a ban on fracking to increase the domestic energy supply.

It was a huge policy announcement from a prime minister who only took office on Tuesday. And it was overshadowed by concerns about Queen Elizabeth, who died Thursday afternoon at 96 after 70 years on the throne.

In her energy statement, Truss said “we are supporting this country through this winter and next and tackling the root causes of high prices so we are never in the same position again.”

Truss said the two-year “energy price guarantee” means average household bills for heating and electricity will be no more than 2,500 pounds ($3,766 Cdn) a year.

Bills had been due to rise to 3,500 pounds ($5,272 Cdn) a year beginning in October, an 80 per cent jump from the current average annual bill of 1,971 pounds (2,969 Cdn). Energy costs are skyrocketing at a time when many people and businesses are still reeling from the economic aftershocks of COVID-19 and Brexit.

Business and public institutions like hospitals and schools will also get support, but for six months rather than two years.

The government says the cap will cut the U.K.’s soaring inflation rate by four to five percentage points. Inflation hit 10.1 per cent in July and has been forecast to rise to 13 per cent before the end of the year, triggering a prolonged recession, the Bank of England has said.

The British government hasn’t said how much the price cap will cost, but estimates have put it at over 100 billion pounds ($150 billion Cdn). Truss has rejected opposition calls to impose a windfall tax on oil companies’ profits. The cap will be paid for out of Treasury funds and by borrowing.

The opposition Labour Party says that means British taxpayers will have to foot the bill.

Labour Leader Keir Starmer said “the bill will be picked up by working people,” rather than oil companies that are forecast to make 170 billion pounds ($195 billion) in windfall profits over next two years because of soaring energy prices.

Thursday’s announcement will bring relief to many, though critics say the government help should be targeted at the most vulnerable. Those already straining to keep up with relentlessly rising costs say they will still struggle — though maybe not as much as feared.

“I’m not optimistic at all. It’s already too much of a struggle on what we’re getting. I will be in debt without a doubt, there’s no way I can pay 2,500 pounds,” said Sharron Anderson, 60, a former government worker in London who recently became dependent on welfare payments after suffering a heart attack.

After paying for essential bills, Anderson said she’s left with 23 pounds ($34 Cdn) a week to shop for food.

“They should be taxing those energy companies more, that’s what they should be doing. All those profits they’re getting and they’re not taxing them — that alone makes me have no confidence (in Truss),” she added.

The announcement comes after a summer in which the Conservative government refused to say how it would respond. Former Prime Minister Boris Johnson was not able to make major decisions after announcing in July that he would resign. Truss, who won the Conservative Party contest to replace Johnson as leader, declined to announce her plans before she was in office.

The invasion of Ukraine has caused an energy crisis across Europe. Russia has reduced the supplies of cheap natural gas that the continent depended on for years to run factories, generate electricity and heat homes, sending prices soaring.

Britain imports most of its natural gas — though largely from Norway, not Russia — and so is vulnerable to shifts in global prices. Truss’ move will reduce inflation and limit the size of the recession but also lead to higher interest rates and government debt, said Paul Dales, chief U.K. economist for Capital Economics.

Liz Truss took her first questions from Parliament as prime minister of the United Kingdom, addressing her country’s increasing cost of living and energy bills.

“The reason we are in this difficult situation is because of [Russian President Vladimir] Putin’s appalling war in Ukraine,” Truss said. “But we do need to make sure that our energy supplies are more resilient and more secure, so we are never in this situation again.”

Truss announced a new “energy supply task force” that will negotiate long-term energy contracts with suppliers and said Britain would ramp up all domestic energy sources. The U.K. has dramatically increased the amount of energy generated by wind power in recent years and plans to build more nuclear power stations.

Truss also said she would issue more than 100 new licenses for North Sea drilling and end a ban on fracking in Britain. Both measures will be condemned by environmentalists, who worry Truss may backtrack on the U.K.’s legally binding commitment to reduce carbon emissions to net zero by 2050.

Truss says she supports the net zero commitment to fighting climate change but that it should not come at a huge cost to people and businesses.