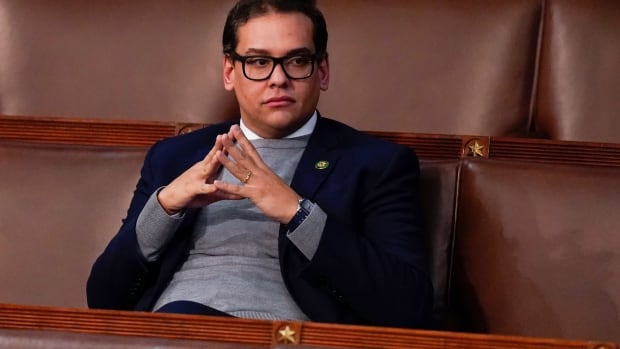 The U.S. House ethics committee was asked Tuesday to investigate Rep. George Santos, the newly elected Republican from New York who has admitted to lying about his job experience, college education and even family heritage, and now faces questions about his campaign financial disclosures.

Two Democrats requested the probe, saying Santos “has failed to uphold the integrity expected of members of the House of Representatives.”

In a letter to the ethics committee, Democratic Reps. Ritchie Torres and Dan Goldman, both of New York, said Santos also failed to file “timely, accurate and complete” financial disclosure reports as required by law. They said the reports Santos did file are “sparse and perplexing.” They asked the panel to investigate and “take appropriate action as soon as possible.”

Some Democratic leaders said Santos should be expelled from the House.

A spokesperson for Santos did not immediately respond to a request for comment.

WATCH | The lies Santos has told:

Long Island, N.Y., prosecutors have launched an investigation into Republic congressman-elect George Santos, following claims that Santos lied about his heritage, education and professional background while campaigning for office.

Santos has admitted to fabricating several aspects of his life story and experience in his run for the House seat that he won in November, helping to give Republicans a narrow majority. Nevertheless, the newly elected lawmaker was sworn into office last week alongside all other members of the House.

Republican leaders have refused to take action against Santos, whose election helped give them a 222-seat hold on the House majority. Santos also voted last week in the raucous balloting to make House Republican Leader Kevin McCarthy the House speaker.

“Obviously there were concerns about what we had heard,” said Scalise. “So we’re gonna have to sit down and talk to him about it.”

Admits to ’embellishing’ his resume

Santos admitted two weeks ago that he lied about his job experience and college education during his successful campaign for a seat in the U.S. House.

Santos had also said he had worked for Citigroup and Goldman Sachs, but neither company could find any records verifying that.

In an interview with the New York Post, Santos said: “My sins here are embellishing my resume. I’m sorry.”

Democrats were scathing in their criticism.

“Kevin McCarthy owns George Santos, lock stop and barrel,” said Rep. Pete Aguilar of California, the chair of the House Democratic caucus. “It’s the only reason why he was seated, to give George Santos that ability to vote for Kevin McCarthy. So let’s call this exactly what it is. There should be repercussions.”

It’s unclear what the ethics committee’s next steps will be. As part of the new House rules package, any member of the public can now file complaints against lawmakers. Ethics advocates have warned other new rules will weaken the committee’s staff and membership.

The committee has not fully formed yet as House Republicans are in the midst of choosing committee chairs, members and setting up the new Congress.