Home Middle East Ukrainian doctors were performing heart surgery on a child. Then the power... 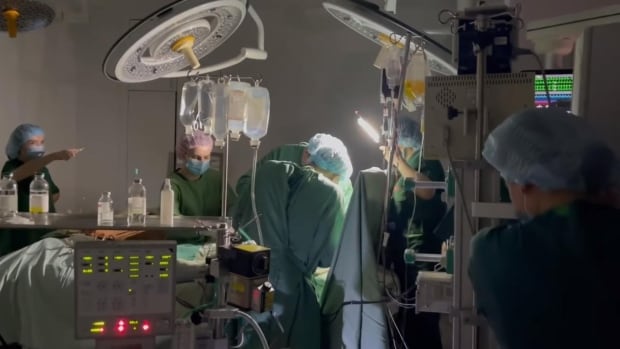 As It Happens6:37Ukrainian doctors were performing heart surgery on a child. Then the power went out

Doctors in Kyiv were performing open-heart surgery on a 14-year-old boy Wednesday when the lights suddenly flickered off.

Russian missiles were raining down on the Ukrainian capital city that day when the Kyiv Heart Institute unexpectedly lost light, power and running water.

Hospital staff sprang into action, booting up a backup generator to keep the boy’s life support system running. The surgeons continued to operate using only the light from their phones and headlamps.

“Everything was co-ordinated. Nobody panicked,”  Dr. Mikhail Zagrychuk, a transplant surgeon at the hospital, told As It Happens host Nil Köksal.

“They managed to finish this surgery, and fortunately this child survived, and the surgery was successful. But the first couple of seconds … it was very horrible.”

Zagrychuk had just wrapped up a kidney transplant surgery when the hospital suddenly went dark.

His patient, he says, was already out of the woods. But in the next room, his colleagues were busy operating on the child.

“The surgeons operate with their head-lamps on,” he could be heard saying in Ukrainian in the video, which the hospital posted to Facebook. “Try to complete it as fast as possible. We will start the generator now.”

Doctors at the Kyiv Heart Institute were performing heart surgery on a teenage patient Wednesday when the power went out, so they continued operating by the light of their phones and headlamps.

Todurov told CBC the boy was undergoing an aortic valve replacement when the power went out.

The surgery, he said, was successful, and the patient’s prognosis is good.

“Parents are happy. Everyone is happy,” he said.

Blackouts all over Ukraine as winter sets in

The blackout happened amid heavy Russian bombardment in Ukraine, which knocked out electricity and running water across much of the capital and other parts of the country.

National power grid operator Ukrenergo said Friday that about 30 per cent of electricity supplies were still out.

At least 21 people have been killed in the attacks since Wednesday.

Russia says the aim is to reduce Ukraine’s ability to fight and push it to negotiate. But Ukraine says the strikes on infrastructure are war crimes.

Zagrychuk says health-care workers have had to transport organs between cities even as missiles rained down from the sky and air-raid sirens urged people to seek shelter.

A Russian rocket struck the maternity wing of a hospital in eastern Ukraine on Wednesday, killing a newborn boy and critically injuring a doctor. The overnight explosion left the small-town hospital a crumbled mess of bricks.

Asked how he manages to continue his work under these kinds of conditions, Zagrychuk laughed.

“We are stronger from day to day, and we couldn’t even imagine that this is possible. If somebody [had told] me one year ago that it’s possible, I didn’t believe, I couldn’t imagine. But we’re still going.”

The power is back up and running at the Kyiv Heart Institute now, but Zagrychuk says it was touch and go for several hours on Wednesday.

He says friends and family members of patients and staff brought in water as they worked to get their own supply back up and running.

“This war [taught] us to get [through] trouble together and help each other,” he said.

The boy who underwent the heart surgery was one of 190 patients in the hospital during the blackout, according to Todurov.

“In this unusual situation, we did not lose a single patient,”  Todurov was quoted as saying on the Facebook post sharing the surgery video.  “I thank all employees for their co-ordinated and selfless work…  We will hold our medical front until the victorious end.”