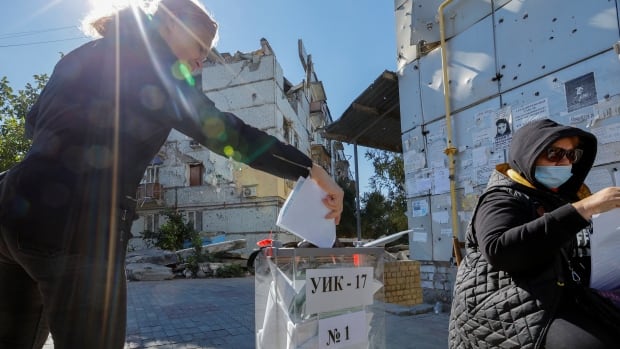 An overnight drone strike near the Ukrainian port of Odesa sparked a massive fire and explosion, the military said Monday.

The airstrike was the latest in a series of drone attacks on the key southern city in recent days. This one hit a military installation and detonated ammunition when it struck. Firefighters were struggling to contain the blaze, the Ukrainian military’s southern command said.

Concerns are growing that Russia may seek to escalate the conflict once it completes what Ukraine and the West see as illegal referendums in parts of Ukraine under its control.

The voting, which ends Tuesday, happened after thousands of residents had fled and has included images of armed Russian troops going door-to-door to pressure Ukrainians into voting. Russia is widely expected to declare the results in its favour, a step that could see Moscow annex the territory and give it the pretext to seek to defend it as its own territory under the Russian nuclear umbrella.

Many residents fled the regions before the referendums got underway, scared about being forced to vote or potentially being conscripted into the Russian army.

Petro Kobernik, who left the Russian-held southern city of Kherson just before the preordained voting began Friday, said the prospect of living under Russian law and the escalating war made him and others extremely jittery about the future.

“The situation is changing rapidly, and people fear that they will be hurt either by the Russian military, or Ukrainian guerrillas and the advancing Ukrainian troops,” Kobernik, 31, told The Associated Press in a telephone interview.

As some Russian officials brought ballots to neighbourhoods accompanied by armed police, Kobernik said his 70-year-old father shut the door of his private house in the village of Novotroitske — part of Kherson — and vowed not to let anyone in.

The Kremlin has used this tactic before. In 2014, it held a hastily called referendum in Ukraine’s Crimea region to justify annexation of the Black Sea peninsula, a move that was denounced as illegitimate by most of the world.

Estimates suggest roughly 160,000 square kilometres of Ukraine is littered with unexploded bombs and mines, requiring specialized teams to clean up the country — even as more missiles fall.

Moscow-appointed governor of the southern Kherson region, Vladimir Saldo, vowed that Ukrainian attempts to derail the referendum by shelling the city won’t succeed.

“It’s complicated because of security issues, but everything will be done to make the balloting safe for the voters and election officials,” Saldo said in a video address. “People are waiting to join Russia and want it done as quickly as possible.”

Many residents there tell a different story.

“The streets are empty as people stay home,” Marina Irkho, a 38-year-old resident of the Sea of Azov port city of Berdyansk said by phone. “No one wants them to declare us part of Russia and start rounding up our men.”

The Kremlin last week announced a partial mobilization to add at least 300,000 troops to its force in Ukraine in the run-up to the votes in the occupied regions.

The move, which marked a sharp shift from Vladimir Putin’s previous efforts to portray the war as a limited military operation that wouldn’t interfere with most Russians’ lives, proved extremely unpopular at home.

Thousands of men of fighting age flocked to airports and Russia’s land border crossings in an effort to avoid being called up. Protests sparked in various parts of the country, and Russian media reported an increasing number of arson attacks on military enlistment offices.

Tensions grew on Monday morning when a young man came to a military enlistment office in the Siberian city of Ust-Ilimsk and shot the military commandant at close range.

Russian media reports claimed the man walked into the facility saying “No one will go fighting,” and “We will all go home now.” Local authorities said the military commandant was in intensive care in an “extremely grave” condition.

LISTEN: | How the Ukraine war is changing the lives of Russian citizens:

Russian vlogger Niki Proshin runs a YouTube channel dedicated to publishing videos about Russian culture and ordinary life in St. Petersburg. This week, it meant livestreaming an anti-war protest and trying to avoid drawing the attention of the authorities. And like many conscription age Russians, Proshin is also wondering how long he wants to stay in the country.

The man, identified in the media as 25-year-old local resident Ruslan Zinin, was reportedly upset that a call-up notice was served to his best friend who didn’t have any combat experience — which the authorities have said is the main criteria for the draft.

Irkutsk regional governor Igor Kobzev wrote on the Telegram messaging app that the draft office head was in hospital in a critical condition, and that the detained shooter “will absolutely be punished.”

According to the British military, first batches of the mobilized reservists have already started to arrive at Russian military bases.

In an online intelligence briefing, the British Defence Ministry said “many tens of thousands” had been called up. However, the Russians face challenges ahead.

“Unlike most Western armies, the Russian military provides low-level, initial training to soldiers within their designated operational units, rather than in dedicated training establishments,” the British said.

Under normal circumstances, two battalions deploy while a third remains behind to train. But in the Ukraine war, even the third battalion is deploying, weakening that training, the British said.

In Ukraine in the meantime, a Russian rocket attack targeted a village in southeast of the country. The attack struck an unnamed village and the regional centre of Zaporizhzhia, regional military official Oleksandr Starukh said online.

He posted pictures of damaged buildings and said unspecified infrastructure also had been damaged and fires were sparked by the attack.