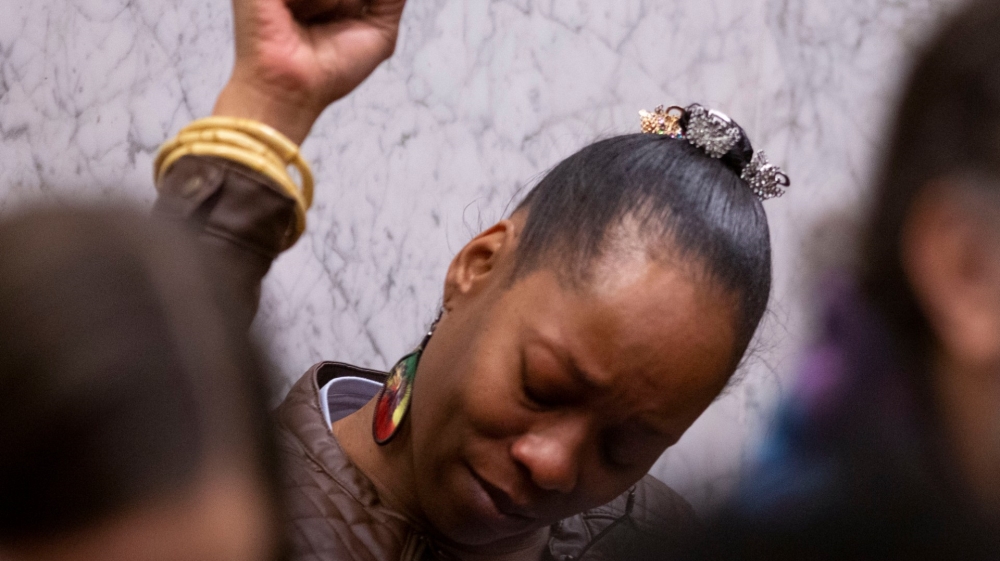 One of the protesters arrested in Portland, Oregon, early Monday is a Black woman who was assaulted by a white supremacist in a high-profile case three years ago and who now leads a group of “moms” in racial justice protests each night.

Demetria Hester, 46, was booked on suspicion of disorderly conduct and interfering with a police officer during a protest that began Sunday night and stretched into the early morning hours.

Hester gained prominence in 2017 when she was assaulted by a white supremacist while riding a light-rail train.

The man who attacked Hester, Jeremy Christian, stabbed two men to death the following night and critically injured a third man when they came to the defence of two Black woman – one of them wearing a Muslim head-covering – who were being harassed by Christian as they rode the train.

Hester gave emotional testimony earlier this year at Christian’s murder trial – testimony that took a dramatic turn when Christian threatened to kill her in an outburst that ended with him getting dragged from the courtroom. She also publicly criticised the police for failing to arrest Christian that night, which allowed him to commit the murders the following day.

Christian was convicted and given two life sentences without possibility of parole.

Hester has reappeared in public recently as one of the main organisers of the “Wall of Moms,” a group of mostly white, self-described parents who have been protesting nightly. She and others are demanding that the City Council defund the Portland Police Bureau and reinvest the money in the Black community.

Hester became more visible in the group about two weeks ago, when the original “Wall of Moms” group disbanded under accusations from some Black leaders that the white founders were seeking to monetise the Black Lives Matter movement and were not listening to Black voices.

The wall of moms are dancing to the rhythmic chanting of speaker Demetria Hester. Aside from the warnings, Portland Police has allowed this demonstration to continue tonight. #PortlandProtest #PDXprotest #BlackLivesMatter pic.twitter.com/kziQbQ89WK

Since then, she has been leading a smaller number of moms on marches each night, using a bullhorn to lead chants in a voice cracking with fatigue. She is also a plaintiff in a lawsuit against the police.

Hester spoke to AP on Saturday, before her arrest, and said that the “Wall of Moms” – now called “Moms United for Black Lives” – had regained its focus after the internal leadership struggle.

“Our life is in danger just because we want to express the fact that we are being abused, killed, raped, and no one is doing nothing about it. And that’s why we’re protesting, and we will never stop because we want to be treated equal as people,” she said.

Hester’s arrest was captured on video and posted on Twitter. Hester, wearing a yellow backpack, is seen standing in the street when an officer in riot gear approaches her and says, “You’re under arrest.” Hester does not resist and is led away.

Her arrest angered some in Portland, including protest groups and civil rights organisations such as the Council on American-Islamic Relations, which called her “one of the bravest people we know”. The hashtag #freedemetria was gaining traction Monday.

A group of protesters and residents of the neighborhood have come out in front of the PPA building. A mass arrest is happening at the moment. Protesters tell me #Portlandmoms leader Demetria Hester has just been arrested. #PortlandProtest #PDXprotests #BlackLivesMatter pic.twitter.com/wcclGzDoSB

“PPB erred when they didn’t believe her, and now they’ve erred again in targeting her,” CAIR Oregon tweeted Monday, referencing the light-rail stabbings. “She has every reason to be upset. If they believed her, maybe two lives would still be with us today.”

The arrest was getting much of the attention Monday in Portland despite the fact that police arrested 15 other people in demonstrations that also left two police officers with injuries.

Police said protesters outside a Portland police union building set fires and used a mortar to launch commercial-grade fireworks at officers. One officer was treated for a burn on her neck, and another had cuts on his leg, police said.

The demonstrators who were arrested could face misdemeanour charges of disorderly conduct or interfering with a peace officer. Their detentions came after nine protesters were arrested Saturday night and 24 Friday night.

The protests in Portland have happened nightly for more than 70 days since George Floyd was killed in Minneapolis in late May.

The violence reached an apex when protesters targeted a federal court last month that was defended by federal agents who lobbed tear gas at the attacking demonstrators in two straight weeks of nightly confrontations.

The federal agents withdrew more than a week ago amid hopes for calm, but the protests have resurfaced miles from the court.