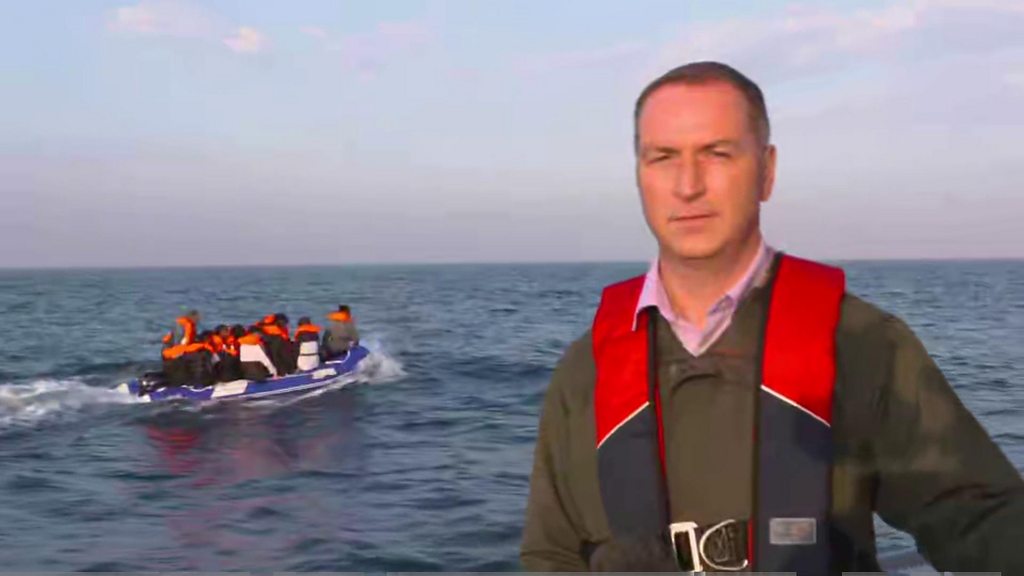 About 20 Syrian migrants in a boat were picked up by Border Force on Monday morning, the BBC’s Simon Jones said.

More than 4,000 people have successfully crossed the Channel from France in small boats so far this year.

“It’s a political measure to show some kind of muscle but technically speaking it won’t change anything.”

Mr Dumont said the French authorities needed to monitor about 300 miles of coastline if they were to stop migrants launching small boats from French shores.

“We are already trying to whatever we can. We can’t have a camera and police officer every 10 metres.”

The Ministry of Defence says it has sent an RAF Atlas surveillance aircraft to help Border Force operations in the English Channel.

Home Secretary Priti Patel has been in Dover on Monday and was seen disembarking from a police boat that had been in the English Channel earlier in the morning.

A spokeswoman said it was a “private visit” and the Home Office would not be commenting on the reasons for her being there.

More than 700 people were intercepted crossing the English Channel last week, including 235 – the record for a single day – on Thursday.

Immigration minister Chris Philp is due to go to Paris this week to demand stronger measures from French authorities.

He said he wanted to make the route “completely unviable” so migrants “will have no incentive to come to northern France or attempt the crossing in the first place”.

Mr Philp added he also wanted to “return as many migrants who have arrived as possible”, adding there were “returns flights planned in the coming days”.

Sir David Normington, former permanent secretary at the Home Office, told the BBC the “only solution” was to work with French officials to “persuade them to intensify their efforts” to stop the migrants leaving France.

“If it takes money to help the French increase their resources and their manpower then that will have to be done,” he said.

Sir David said he was “sceptical” about the deployment of the Royal Navy.

“If the navy is going to push boats back, it will have to go into French water to do that, and then you can only do that with the permission of the French government.”

The prime minister said he wanted to work with the French to stop the activity of “cruel” criminal gangs taking migrants across the English Channel.

“But number two we need to look at the legal framework that we have, all the panoply of laws that an illegal immigrant has at his or her disposal that allow them to stay here and we need to look at what we can do to change that.”

COVID-19 changing, not over yet; tough to analyse future emerging variants: WHO