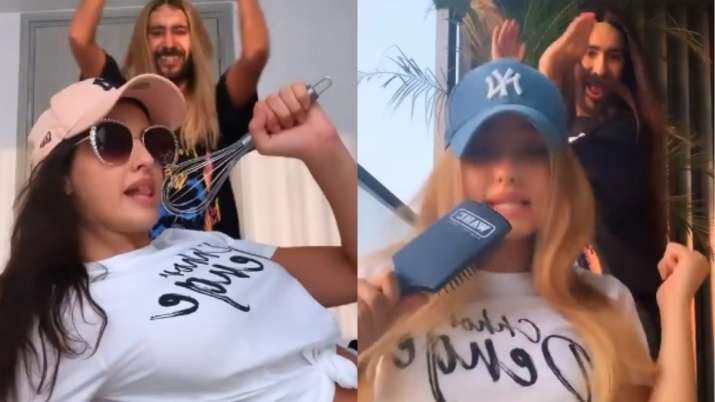 Bollywood actress and brilliant dancer Nora Fatehi exactly knows how to keep her fans entertained. Amid the tough times when the ountry is fighting against the COVID-19 scare, Nora treated her fans with a hilarious dance video of herself performing on Sean Paul’s viral song Temperature. She shared a fun video with her friend, make-up artist and hairstylist Marce Pedrozo and joked that she was ‘available for bookings’. She captioned the video, “Available for bookings now to hype up the Lockdown… happy sunday.. @marcepedrozo.”

In the clip, Nora can be seen lip-syncing to the lyrics and using a variety of things, including a whisky, hairbrush and remote control to double up as a microphones . Meanwhile in the background Marce, donned several long wigs as he clapped to the beat.

The moment she shared the clip, her fans and followers couldn’t kep calm and dropped their love in the comments section. Nora’s friends from the industry also commented on the post. Choreographer and director Rajit Dev said, “I’m done I’m self inviting myself to this madness. @norafatehi @marcepedrozo.”Sports anchor Eisha Acton commented, “OMG these get better and better, the teddy bear, Marce’s hair blowing in the wind hahahhahahha hahahah keep em coming.” Producer Lizelle D’Souza wrote, “Hahhahahahahahhahahahahahha oh god u two.”

In 2018, Nora shot to fame with the special song, Dilbar, from Satyameva Jayate. She also featured in popular songs Kamariya, from Stree, and O Saki Saki, from Batla House. She also has acted in films such as Bharat and Batla House.

On the professional front, Nora recently joined the judges’ panel of the dance reality show, Dance Deewane. She was last seen on the big screen in Street Dancer 3D, directed by Remo D’Souza. Her next release will be the war drama Bhuj: The Pride of India. The film also features actors Ajay Devgn, Sanjay Dutt and Sonakshi Sinha. It will mark her digital debut.