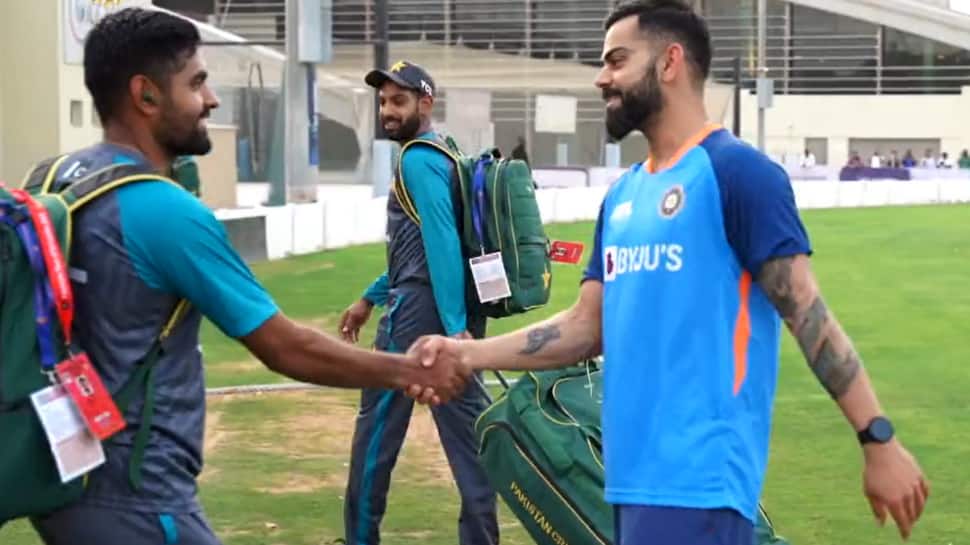 Team India landed in Dubai on August 23 and they have straightaway hit the nets ahead of the all-important Asia Cup 2022 clash vs Pakistan. BCCI released a video later on Wednesday (August 24) in which Team India members can be seen hitting the training session and players also meeting their counterparts from Pakistan and Afghanistan. While Hardik Pandya and Yuzvendra Chahal chatted with Afghanistan’s Mohammad Nabi, Virat Kohli was seen having a word with Rashid Khan. A glimpse from the video also saw Kohli meeting Pakistan captain Babar Azam on the sidelines. They met with a smile on their faces and shook hands too.

India play Pakistan on August 28 in their first clash of Asia Cup 2022 at Dubai International Stadium.

Not to forget, Babar had lent his support for Kohli after his succesive failure in IPL and then in England. Babar had written that he hopes Kohli will be back among runs soon and Virat, in return, had thanked for his words and had wishes him all the success with the bat. The friendly exchanged on Twitter had gone viral.

The comparisons between Virat and Babar come up every time the two sides play each other. Even when they not, Babar is compared with Kohli as plays a similar role for Pakistan. Bats at No 3 and captains the side, something Kohli has been synonymous with over the years. Former Pakistan captain Wasim Akram believes that the comparison between the two batters in quite natural as they are the best from their countries. Akram said that in his time, there would be constant comparisons between Pakistan’s Inzamam-ul-Haq and India’s Sachin Tendulkar. Before that, fans liked comparing Javed Miandad with Sunil Gavaskar. The future generations will see these comparisons.