Home Middle East Vladimir Putin is weakened and his opponents are preparing to strike |... 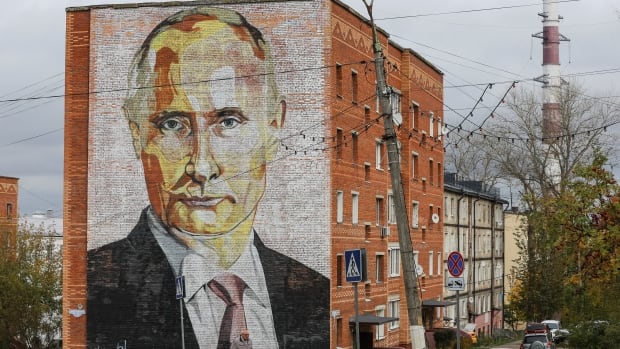 Exactly when Vladimir Putin will fall from power, Alexey Minyaylo isn’t sure, but he believes it’s close.

Minyaylo, 37, is perhaps best known in Russia for his efforts to get non-Kremlin affiliated candidates on the ballot for the 2019 Moscow city elections.

In the protests that followed, he was accused of inciting a riot and spent almost three months in jail.

“The vertical of power is shaking,” Minyaylo told CBC News via video interview from his home in Moscow, where he has remained since Putin’s Feb. 25 invasion of Ukraine, with all the risks that brings.

Despite the imprisonment of other anti-war activists, Minyaylo is still active. One of his projects is campaigning to help Ukrainians forcibly deported from occupied Russian lands returned to their homes.

Laying the groundwork for a more democratic Russia

He’s also part of what he calls a “grassroots campaign” to lay the groundwork for a more democratic Russia after Putin — who turns 70 today — is gone.

“Russians don’t believe anything can change. So if we set up some vision of the future, that might work, ” Minyaylo said.

He says his group — which he won’t identify for safety reasons — will soon release a new vision for a post-Putin Russia that he hopes ordinary Russians will connect with. He hopes it will also contain a commitment by Western nations to ease sanctions and eventually give Russians a chance to return to normal life.

With Russia’s army in disarray in Ukraine and a mass mobilization push to enlist hundreds of thousands of Russian men sparking unrest across the vast country, Minyaylo believes the pre-conditions for Putin’s demise are taking shape.

Ukrainian troops are advancing rapidly not just in the country’s east, but also the south, capturing territory that only days ago Russia unilaterally claimed as its own through a series of annexations.

“Putin is very good at holding power, so I don’t believe that anything can be done just by people revolting,” he said. “The only feasible way, in my mind, is some part of the establishment persuading Putin to step out of the way.”

Other longtime Russia watchers concur with his assessment.

“Putin’s position is definitely weakening and the more the situation escalates, the quicker the process is,” said Abbas Gallyamov, a former Putin speechwriter who is now a political analyst.

“The elites are at least beginning to act and they see that he has lost control over the situation,” said Gallyamov, who spoke to CBC News from his home in Israel, where he has lived since 2018.

One of the most prominent volleys was fired by Ramzan Kadyrov, the Chechen warlord.

“Yesterday, it was the parade in Izium,” he wrote on Meduza, an independent news site, referring to the liberated Ukrainian city.”Today it’s the Ukrainian flag in Lyman — and what about tomorrow? It would all be well and good if it weren’t so bad.”

Ukrainian forces have retaken the eastern city of Lyman just a day after Russia annexed the region. A key logistics and supply hub, the city’s capture is seen as a possible step to retaking the entire Donbas.

Kadyrov, who commands his own militia, is thought to have aspirations beyond his southern Caucasus republic.

His remarks were quickly amplified by Yevgeny Prigozhin, founder of the Wagner Group, a firm of military contractors. The private army is the largest in Russia and has been fighting Ukrainian troops in the Donbas region.

“Beautiful, Ramzan, keep it up,” he wrote on social media in response to Kadyrov’s criticism.

Both men are even more hard line than Putin. It’s unlikely countries in the West or Ukraine would welcome either as an improvement on the current leadership.

On the other side of the political spectrum is anti-corruption crusader Alexei Navalny.

Imprisoned by Russian authorities after an unsuccessful assassination attempt by what investigative journalists have identified as agents of Russia’s secret police, Navalny has announced he intends to resurrect his regional political network to help organize those who oppose mobilization.

Who could replace Putin?

This week, Navalny penned a long essay in the Washington Post about how a future democratic Russia can be both prosperous and no longer a threat to its neighbours.

Navalny, who’s often been kept in solitary confinement since his detention in January 2021, has continued to issue public statements through his lawyers and most of his key leadership team works outside Russia.

“He has moral capital [from being in jail] and he has a lot of ideological followers who are ready to go to work,” said Minyaylo, the activist.

On the other hand, the Kremlin’s unrelenting propaganda against him has had an impact in undermining public trust in Russia’s liberal opposition — and for any current parliamentarian to even mention Navalny’s name, let alone acknowledge having talks with members of his organization, would be political suicide.

Still, Gallyamov says it’s too soon to count anyone out as a possible power vacuum at the top of Russia’s leadership will create unpredictable opportunities for whoever manages to seize the initiative.

“It’s a paradox, the revolutionaries are not creating revolutions as much as they reap its benefits. Revolutions happen mostly on their own because of the mistakes government’s make,” he said.

“[Revolutionaries] raise flags under which revolutions are happening — and in that sense, what Navalny’s team is doing is absolutely right.”

Gallyamov says he believes the first move against Putin will come from elites who will urge him to pick a successor, a move Russia’s president has thus far resisted.

“At a certain point, this may look like a salvation to Putin. With the lost war in Ukraine, the dissatisfaction of the masses, and the paralysis of the state apparatus, the suggestion to find a successor will not look like an act of disloyalty to him anymore,” he said.

Other analysts believe a Russia without Putin remains a distant fantasy, especially for those in Ukraine and in the West who want him gone — or dead.

“I think really too early to say that Putin’s regime is in any danger of seeing the leader go away,” said Alexander Gabuev, a senior fellow at the Carnegie Endowment for International Peace.

While Gabuev says there may be fissures in Russia’s elite solidarity, at the moment they don’t pose a serious threat to Putin’s 22-year grip on power.

“We have seen massive pressure on [authoritarian] regimes and yet they find ways to sustain the leaders,” Gabuev said from Istanbul, noting that dictatorial rulers in Belarus, Venezuela and Iran have all withstood mass demonstrations and defections from the ruling class, and have sustained themselves through use of force and intimidation.

Even among Russian oppositionists who want Putin gone there’s a reluctance to attach a timeline to when things may change.

“It is important, I believe, not to set yourself any timeframe, because if you set them and then nothing happens, you’re inevitably going to be disappointed,” said Vladimr Milov, one of Russia’s most prominent anti-Putin crusaders.

LISTEN | Front Burner on the car bomb that killed a pro-Russia commentator, Aug. 26:

Front Burner21:59A car bomb’s impact on a Russia at war

On Saturday, a car bomb killed pro-war Russian commentator Darya Dugina on the outskirts of Moscow. Dugina was the daughter of ultranationalist philosopher Alexander Dugin, whose influence on Russian President Vladimir Putin is widely debated — leading to speculation the bomb was meant for Dugin himself. Today on Front Burner, The Guardian’s Moscow correspondent Andrew Roth explains who Dugin is, the competing theories for who was responsible for the car bombing, and what impact the attack could have on how the war in Ukraine is fought.

A former deputy minister of energy in 2002, of late Milov has been associated with Navalny’s efforts to run against Putin for President. Rather, he argues the focus should be to exert as much pressure on Putin and his government as possible.

“His likely failure in Ukraine, more sanctions against him, changing the public opinion so that more Russians turn away from him and speak up against him. All these things will inevitably lead to the crash of this regime,” he said.

“Putin’s system isn’t strong enough to carry the burden it has taken.”

Alexey Minyaylo, the Moscow activist, says he believes the days ahead until Putin is gone will be grim — for both Ukrainians and Russians.

“People will die in the process,” he said. “But if I didn’t have hope, I wouldn’t have stayed in Russia.”