Home Tech Wasn’t Everyone Booing Apple Till Fortnite Also Got Kicked Off The Google... 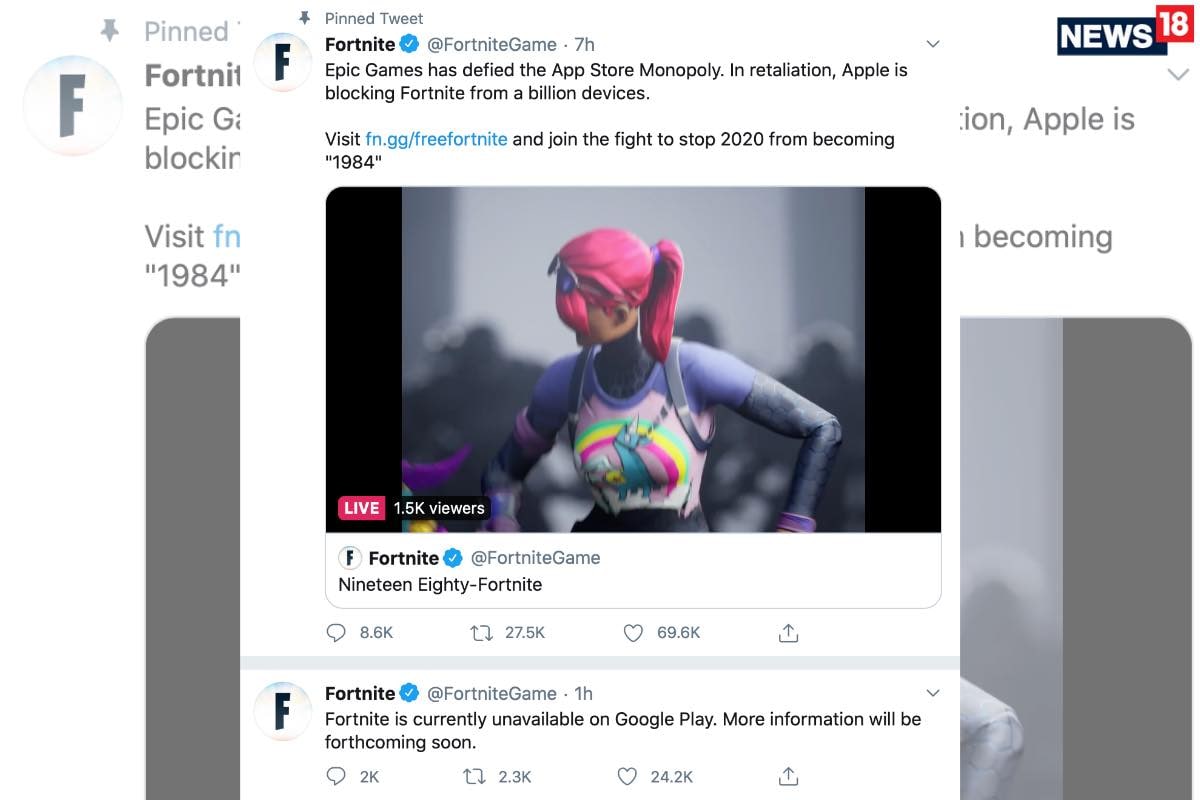 It has been a tumultuous few hours for the popular battle royale game Fortnite and its developer, Epic Games. Much is its own doing, mind you. The developer got into a tiff with Apple after the game was booted out of the Apple App Store. The reason? The developers implemented their own in-app payment system which bypassed the App Store for in-app purchases and subscriptions, something that Apple has made very clear in the past, that they will not allow. If you happened to be on social media at the time, there was a sense that the world was cheering on David against Goliath. The battle of the honest versus the corporates. The battle of humble man’s tech versus the rich man’s tech, so to say. But all that came crashing down when a few hours later, Google also dumped Fortnite off the Play Store for Android devices. For exactly the same reason. Sneakily updating the app with their own in-app purchase system that bypassed the Play Store route as well.

How the mood changes. In response to Apple’s move, Fortnite tweeted, “Epic Games has defied the App Store Monopoly. In retaliation, Apple is blocking Fortnite from a billion devices.” A few hours later, when Google did the same, Fortnite’s tone on Twitter seemed a bit different. “Fortnite is currently unavailable on Google Play. More information will be forthcoming soon,” is all they said. Legal action is underway, which one suspects, will only make matters worse for gamers who should not expect to see Fotrnite downloads become available again on the App Store and the Play Store anytime soon. Unless one of the sides backs down.

Epic Games also filed a legal complaint against Apple at the District Court of Northern California before the Google move came about, which reads, “This case concerns Apple’s use of a series of anti-competitive restraints and monopolistic practices in markets for the distribution of software applications (“apps”) to users of mobile computing devices like smartphones and tablets, and (ii) the processing of consumers’ payments for digital content used within iOS mobile apps (“in-app content”). Apple imposes unreasonable and unlawful restraints to completely monopolize both markets and prevent software developers from reaching the over one billion users of its mobile devices (e.g., iPhone and iPad) unless they go through a single store controlled by Apple, the App Store, where Apple exacts an oppressive 30% tax on the sale of every app. Apple also requires software developers who wish to sell digital in-app content to those consumers to use a single payment processing option offered by Apple, In-App Purchase, which likewise carries a 30% tax.”

But Epic Games isn’t going to stop there. They have filed a parallel complaint against Google too, at the same court, which reads, “In 1998, Google was founded as an exciting young company with a unique motto: “Don’t Be Evil”. It then goes on to say, “Epic brings claims under Sections 1 and 2 of the Sherman Act and under California law to end Google’s unlawful monopolization and anti-competitive restraints in two separate markets: (1) the market for the distribution of mobile apps to Android users and (2) the market for processing payments for digital content within Android mobile apps. Epic seeks to end Google’s unfair, monopolistic and anti- competitive actions in each of these markets, which harm device makers, app developers, app distributors, payment processors, and consumers.”

Apple and Google both take a 30 percent cut for purchases made via their respective application store platforms. Epic Games has also had a tiff with Apple a few years ago as well and started out its journey on Android in 2018 by being an exclusive for Samsung Galaxy devices via the Samsung Store for a substantial amount of time. Epic Games also pulled Fortnite from the Google Play Store in August 2018 to take advantage of the fact that Google allows users to side-load apps on Android phones, and this allowed them to bypass paying any cut to Google.

“The open Android ecosystem lets developers distribute apps through multiple app stores. For game developers who choose to use the Play Store, we have consistent policies that are fair to developers and keep the store safe for users. While Fortnite remains available on Android, we can no longer make it available on Play because it violates our policies. However, we welcome the opportunity to continue our discussions with Epic and bring Fortnite back to Google Play,” a Google spokesperson said in a statement shared with the media.

You can still download Fortnite from Epic Stores’ own website though. And those who have already download Fortnite on their Apple devices or Android phones and tablets can continue to play them as normal, nothing changes on that front. Only, new downloads aren’t available at the moment, till this latest tiff gets resolved.