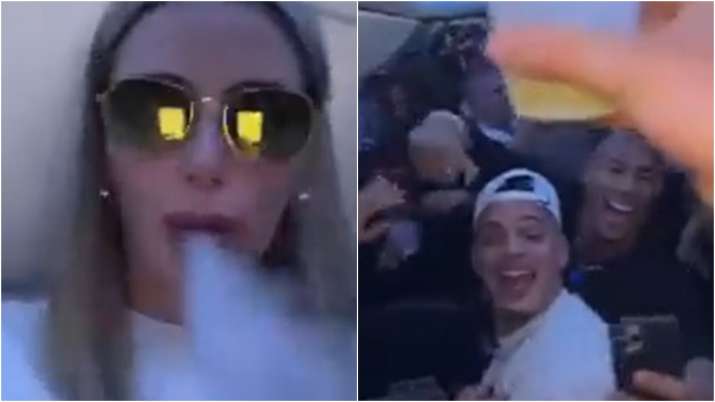 After a group of Canadian passengers were seen partying in a viral video on a flight en route to Mexico, 3 airlines have refused to take them home. This has left them stranded.  The video was made social by Canadian journalist Francis Pilon on Twitter.

In the video, the group can be seen partying on the flight without face masks and flouting social distancing. The video also shows them smoke mid-flight. Pilon shared the video on Twitter with the caption, “Quebec influencers risk hefty fines and are being banned from airlines after breaking aviation rules during a big party that got out of hand on a flight to Cancún”.

Sunwing Airlines cancelled the return charter flight from Cancun that had been scheduled for Wednesday and Air Transat and Air Canada also both said they will refuse to carry the passengers.

Air Transat said on Twitter that the “disruptive passengers” from the Sunwing flight had been trying to return home on its flights, but were denied boarding based on the company’s obligation to ensure passenger and crew safety.

Air Canada issued a statement Wednesday that “to the extent that we can identify the passengers who were part of the group, Air Canada is denying boarding to ensure the safety of other passengers and its crew.”

Among those looking for a way home was Rebecca St-Pierre, a 19-year-old student from Trois-Rivieres, Quebec. She said she tested positive for COVID-19 on Wednesday and was in isolation in Tulum, south of Cancun. She estimated that about 30 others on the flight have tested positive.