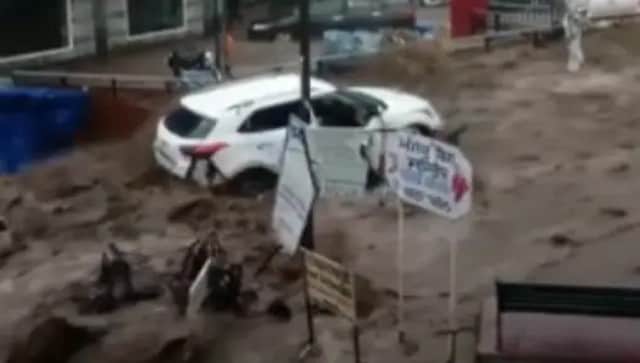 A cloud burst was reported in Bhagsu area of Dharamsala in Himachal Pradesh. News18

A cloudburst in Himachal Pradesh’s Dharamshala has caused flash floods in the hilly town and washed away vehicles in the Bhagsu Nag area.

While several cars were submerged in water, the video recorded by residents of the town shows a white car floating down the street due to the force of flood water. A few more vehicles were also seen at the end of the street, submerged in water. Another video shared by ANI shows the Manjhi River in the state raging due to heavy rainfall. The overflowing of the river has caused damage to around 10 shops in the nearby areas.

There is an orange weather alert on Monday and Tuesday (12 July and 13 July) for heavy to very heavy rains in plains and mid-hills.

The India Meteorological Department (IMD) has also issued a yellow weather alert for 14 July and 15 July.

According to a report in Hindustan Times, two people went missing in the Kangra flash floods.

While there are flash floods in Himachal Pradesh, 30 people have been killed in the states of Rajasthan and Uttar Pradesh due to incidents of lightning.

The Indian Express reported that ex-gratia of Rs 2 lakh each for the kin of the victims  has been announced by Prime Minister Narendra Mod.

On Monday, IMD said that the southwestern monsoon has covered parts of Rajasthan, Punjab, Haryana and west Uttar Pradesh.

Watch: Video of kid throwing tantrum for not getting a burger leaves netizens in splits-India News , Firstpost

Parliament: Both Houses adjourned amid Oppn ruckus; Centre to seek suspension of TMC MP for misbehaving with IT minister-India News , Firstpost

No proposal to give another chance to aspirants who could not take civil services exam in 2020, says Centre