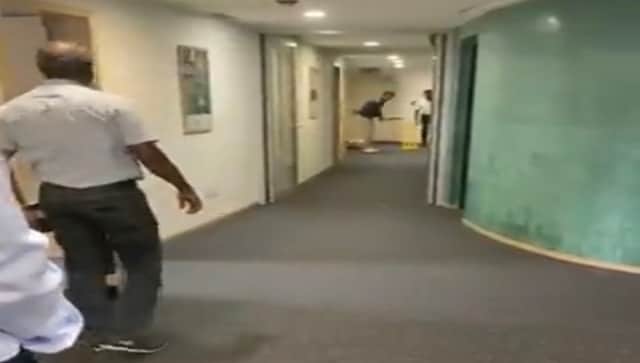 From gully to ground, school to the office, the fever of cricket is spread all across India. Now, the immense popularity of the sport has also taken over the German servicemen at the consulate in Bengaluru. German consul for Kerala and Karnataka Achim Burkart shared a special video on Twitter where the German officials can be seen learning to play cricket from their fellow Indian colleagues. They set up a pitch in the corridor of the office building during the lunch break and enjoyed some cricket sessions. The sight unquestionably reminded viewers of the culture of gully cricket in the country.

The clip features a couple of Indian natives bowling to a German colleague who was in front of portable wickets. After missing the first one, the left-handed person finally managed to connect a delivery. As soon as he hit the ball, his Indian colleagues went on to cheer for him.

The caption of the post said, “During the lunch break, my Indian colleagues try to teach my German colleagues how to play cricket.” Burkart further joking added, “Happy to report that the consulate is still intact.” The comment section saw Indian people appreciating the effort of the German man who invested a lot of concentration in learning India’s most popular game which is not quite trendy in the European nation.

A person found it a “good idea to start the game in Germany.”

A good idea to start the game in Germany!

Another user noted, “Great to see this culture.”

As stated by an individual, “It is a great sport that connects nations. An India-Germany cricket match would be a wonderful idea to boost tourism and friendly relationships between the two countries.”

It is great sport that connects nations sir. An India germany cricket match would be a wonderful idea to boost tourism and friendly relationshions between the 2 countries 😀

You teach us good football n in return learn cricket
What say?

Since it surfaced on the internet on 22 November, the 36-second clip has amassed over 35,000 views and accumulated thousands of likes on Twitter.

Have you ever played cricket in the school corridor?