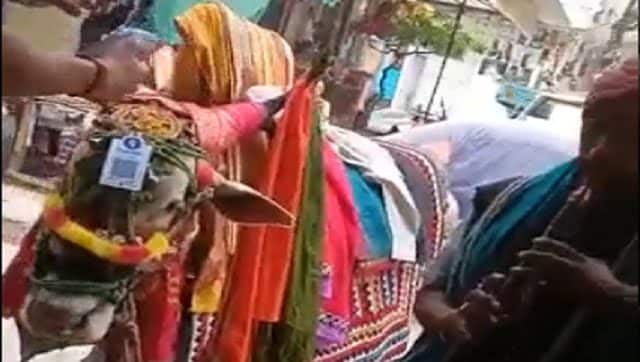 Originally, the video was shared in 2021 on Twitter by Mahindra Group chairman Anand Mahindra where he said, ‘Do you need any more evidence of the large-scale conversion to digital payments in India?’

Screen-grab from the video showing the decorated bull (Gangireddu) with the QR code on his head. Twitter/ @AwanishSharan

E-payments have indeed made lives easier, but a video currently doing the rounds of the internet could not have proved the point better. The video shows a man (haridasu) playing a ‘nadaswaram’ and asking for donations while being accompanied by his decorated bull (Gangireddu). But there is a twist. The clever man has attached a QR code on the cow’s head so that no person can avoid paying on the pretext of having no cash.

The viral video was recently shared by IAS officer Awanish Sharan on his Twitter account. While sharing the peculiar video, the IAS officer wrote in Hindi in the caption, “Ab cash nahi hone ka bahana nahi chalega. (Now the excuse of not having cash will not work).”

The video opens with a man playing an instrument and he is accompanied by his decorated cow and they are standing at the entrance of someone’s house. Then a man can be seen taking out his phone to scan the QR code on the cow’s head to make a donation via online payment. Originally, the video was shared in 2021 by Mahindra Group chairman Anand Mahindra.

The business tycoon, while posting the video, wrote in the caption, “Do you need any more evidence of the large-scale conversion to digital payments in India?!” The 2021 video has been played nearly 4 lakh times and has garnered more than 27,000 likes. Several social media users hailed the idea and started claiming that “digitalisation is at its peak”.

One user commented in Hindi, “Now there is no more stress of returning the money.”

Another commented, “It proves that digitalization is at its peak…”

It’s proves that digitalization is on its peak… 🤪😃😜

Some of the users claimed that it’s a “revolution” that has begun in India.

Should have tagged some Western media outlet to show the world this silent and beautiful revolution happening in India. A model for the world to emulate.

Earlier, another viral video showed a man giving ‘shagun’ money to a ‘dholwala’ at a wedding by scanning a QR code pasted on his dhol.