Home Sport WATCH: Sanju Samson hit MASSIVE six to get off the mark in... 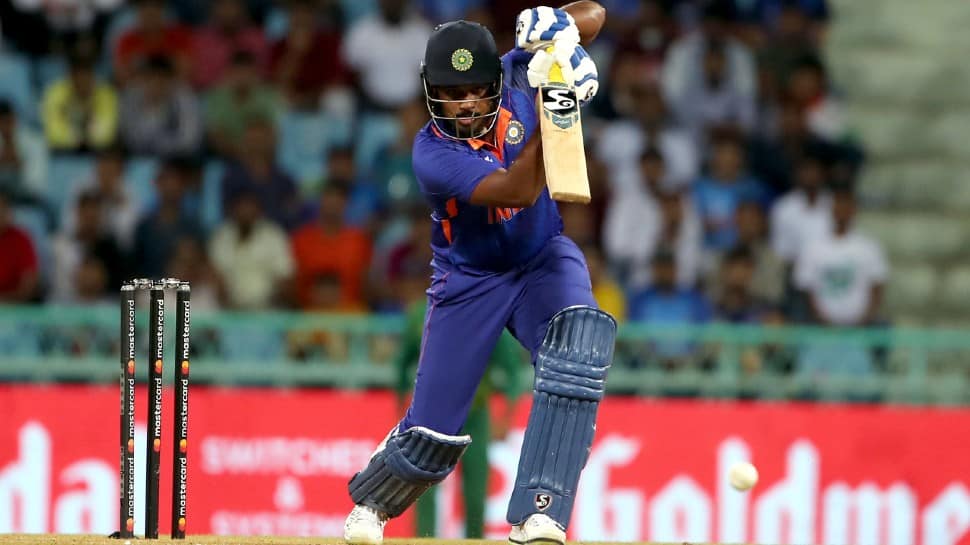 Sanju Samson played a lone and valiant hand as Team India succumbed to a nine-run loss in the first ODI against South Africa in Lucknow on Thursday (October 6). Samson scored a career-best 86 not out off just 63 balls but failed to guide his side to a win.

In a rain-shortened 40-over match, captain Shikhar Dhawan invited South Africa to bat first and the Proteas put on 249/4 before restricting the hosts to 240/8. For India, Sanju Samson played a valiant knock as he remained unbeaten on 86 off 63 deliveries, smashing nine fours and three sixes.

Samson came into bat when India were reeling at 51/4 in 17.4 overs with the hosts having lost key wickets of openers Dhawan and Shubman Gill, as well as Ishan Kishan and Ruturaj Gaikwad cheaply. However, Samson remained undeterred with the pressure situation as he opened his account with a massive six against chinaman bowler Tabraiz Shamsi. Samson stepped out to dispatch a length delivery from Shamsi over the deep long-on boundary for a maximum.

Watch Sanju Samson get off the mark with a massive six…

SIX! @IamSanjuSamson dances down the ground & tonks a MAXIMUM! #TeamIndia

The right-handed batter kept the hosts’ hopes alive in the game till the last over, when India needed 30 runs, but as soon as he missed the fourth delivery, the game was over for Men-in-Blue. “It is always nice to spend some time in the middle and we always play to take our team over the line. I missed connecting two shots, next time I will work even harder. But I am satisfied with my contribution,” Samson said in a post-match press conference.

Speaking about South Africa’s bowler Tabraiz Shamsi, Samson said that they decided to target the Proteas bowler in the last over as he knew that Shamsi was a little expensive against India in the game. “Their bowlers were going about things nicely, Tabraiz Shamsi was a little expensive today so we felt we can target them. We knew he would bowl the last over, I knew if I had to get 24 runs in the final over, I can hit four sixes. I was taking the game deep, the plan was this only and the batters responded nicely,” he added.

Further talking about the match against Proteas, Samson said: “It is always nice to spend some time in the middle and we always play to take our team over the line. I missed connecting two shots, next time I will work even harder. But I am satisfied with my contribution.”