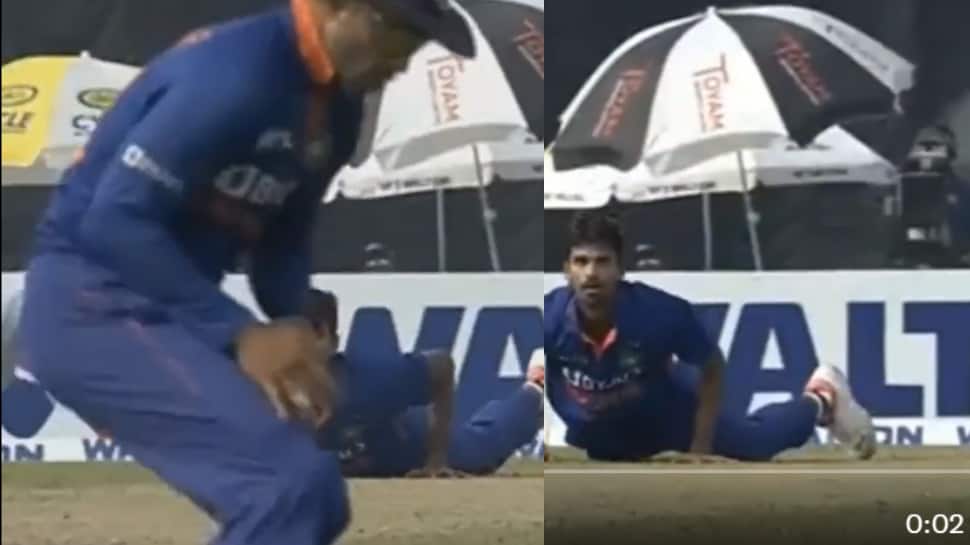 Shikhar Dhawan was a sight to behold when he caught Shakib Al Hasan to send him back in the 17th over of the Bangladesh innings. Opting to bat first after winning the toss, Bangladesh were on back foot with a loss of early wickets and needed Shakib to come good but the left-handed batter was shaken by the pace of Umran Malik and had a tough time against other pacers as well. He tried to up the tempo of the innings against the spin of Washington Sundar but ended up hitting it high up in the air. Dhawan was the man under the ball but it slipped between his fingers.

Washington was down on the ground, looking at the action as Dhawan still caught the ball with his kneed. After getting slipped off his hands, the ball got stuck between the knees of the fielder. It was a strange, never-seen-before catch on a cricket field.

Earlier, Bangladesh won the toss and asked Indians to bowl first. However, they got off to a terrible start, losing their openers cheaply as Mohammed Siraj keep testing them on with his swing bowling. Umran Malik bowled a screamer to dismiss Shanto while Washington Sundar took charge to pick three wickets, removing danger man Shakib Al Hasan and dependable Mushfiqur Rahim in quick succession. Bangladesh had lost 6 wickets inside 100 runs with Mahmudullah their big hope, at the time of writing of this article, still batting in the middle.

Bangladesh are leading 1-0 in the series. They beat India in a close-fought encounter last Sunday and would be hoping for a win in the 2nd ODI. Not to forget, Indian captain Rohit Sharma injured his thumb at the start of the match and went for scans.