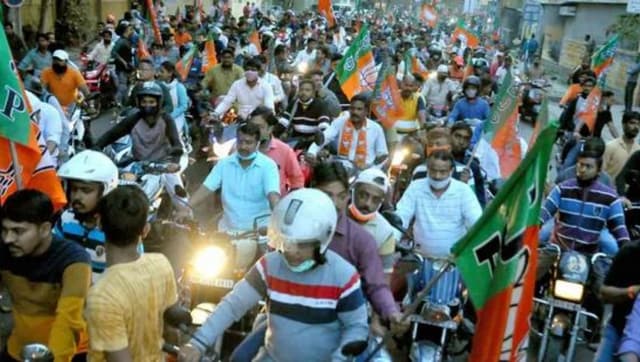 Two women supporters of BJP leader Ashish Das’ group were injured in Wednesday’s incident. After the clash, the Meghnad Pal camp filed a complaint with the police Image Courtesy PTI

Nandigram (West Bengal): Clashes between the ruling Trinamool Congress (TMC) and main opposition party BJP are common in West Bengal. Fighting amongst different factions within the TMC are also on the rise. But Thursday saw an event which is not so common.

A meeting of BJP workers at Tarachand Bar village in Nandigram was marred by a clash between two groups within the saffron camp. According to reports, the clash took place between supporters of rival BJP leaders Ashish Das and Meghnad Pal.

Two women supporters of BJP leader Ashish Das’ group were injured in Wednesday’s incident. After the clash, the Meghnad Pal camp filed a complaint with the police. Based on the complaint, the police have arrested 4 people including Ashish Das. Meghnad pal is said to be close to Suvendu Adhikari.

A few days ago, BJP leader Jaydev Das had switched over to the Trinamool Congress (TMC) at the behest of TMC spokesperson Kunal Ghosh. He was, however, known as one of the veteran BJP leaders in the area before joining the TMC camp. According to sources, he had gone to the hospital to meet the injured.

This incident had taken place in the village of Trinamool Congress (TMC) leader and vice president of the district council, Sheikh Sufian.

Read all the Latest News, Trending News, Cricket News, Bollywood News,
India News and Entertainment News here. Follow us on Facebook, Twitter and Instagram.
Regarding the incident, Sheikh Sufian said, “Many people were forced to join BJP in our Nandigram. Now many new workers of the BJP cannot accept the veteran BJP members, and many
original BJP workers cannot accept the new BJP. Today there was a clash between those two factions of the BJP.”