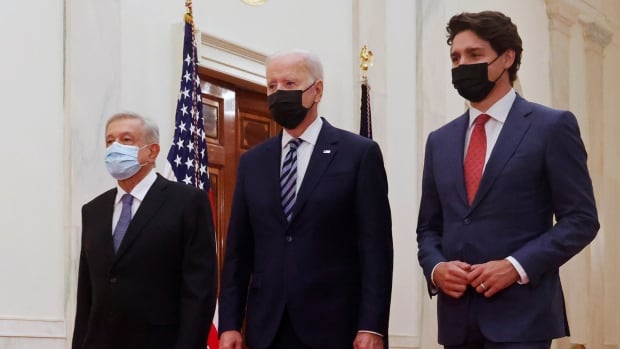 NALS (rhymes with “gals”) — the acronym diplomats and stakeholders use for this sometimes irregular but now revived and recurring meeting of regional allies — now feels more businesslike than chummy. That’s partly driven by the politics of the personalities at the table, but also because current challenges seem to require it.

“I wouldn’t use Three Amigos anymore,” said Carlo Dade, the director of the trade and investment centre at the Canada West Foundation, who also specializes in Latin American policy and holds a membership in the Mexican Council on Foreign Relations. “I think it’s a subtle indication of a shift… a bit more formal, a bit more staid.

“You always had a sort of closeness to the relationship that was thrown off when [Donald] Trump came in,” Dade said, referencing how the former U.S. president shunned this summit and frequently blamed Mexico for America’s problems.

While Trump has been replaced by Biden, protectionist policies have stuck around in Washington. López Obrador was swept into office in 2018 on his own wave of nationalism, and now needs to cement his legacy as the back half of his six-year term plays out.

Even under warm Mexican skies, this January gathering of neighbours and business partners doesn’t feel as sunny as it used to be.

But if it’s cooler and more calculated, is that a problem — particularly for Canada and its heavily integrated economy?

“It’s not about [warmth], it’s about seriousness,” said Amy Porges, a Washington-based trade lawyer who has watched trade files evolve over the decades since the North American Free Trade Agreement (NAFTA) was implemented.

“Canada has always taken the United States more seriously than the U.S. takes Canada… [and] for López Obrador, domestic politics is everything.”

Porges said the populist Mexican president wants to reverse decisions made by his predecessors that integrate Mexico with the U.S. economy. Meanwhile, the U.S. needs Mexican co-operation on supply chains.

“The competition with China is the No. 1 issue for the Biden administration at this point,” she said.

In a briefing at the Wilson Center in Washington, D.C., on Friday, Brian Nichols, the U.S. assistant secretary of state for Western Hemisphere affairs, suggested the Americans would soon announce more details as its Indo-Pacific Economic Framework for Prosperity evolves.

That multilateral dialogue with 13 trading partners didn’t — at least at first — include Canada or Mexico, causing some to wonder why North American trading partners were left out of the conversations about regulatory harmonization and more integrated supply chains.

Dade thinks the Americans may be reconsidering.

“They need wins. They need to keep the momentum going. Canada is there, like the little kid in junior high school who wants to sit at the cool kids’ lunch table finally being allowed in. And Mexico was also miffed that they weren’t included,” he said.

On the other hand, Canada and Mexico would like to keep the privileged U.S. market access they enjoy to themselves. Neither Canada nor Mexico is keen on the request last month from Costa Rica to pursue membership in the North American trade agreement.

“The Three Amigos club suddenly becomes three amigos again when you talk about letting the Ticos [Costa Ricans] or others into NAFTA,” he said.

Louise Blais, a former Canadian diplomat who now works with the Business Council of Canada, noted during a separate media briefing on Friday that Biden’s summit appearance is slotted between his first visit to the Mexican border this weekend, to amplify his administration’s latest push to manage migration, and key talks in Washington on Wednesday with Japanese Prime Minister Fumio Kishida, as U.S.-Indo-Pacific (read: China) priorities evolve.

“The goal for Canada is probably to carve out some attention and space at this summit,” Blais said. Among Canada’s priorities, Blais said she was “hopeful” about the resolution of ongoing energy disputes with Mexico.

John Kirby, the National Security Council co-ordinator for strategic communications, was asked whether Mexico’s recent discrimination against foreign investors in its energy sector could be escalated or resolved in this week’s talks. He said he didn’t want to get ahead of Biden, but “clearly trade issues will be on the agenda.”

In an interview with Reuters on Friday, Trudeau said he “absolutely” hoped to make progress toward resolving this energy issue. While nationalizing Mexico’s energy grid remains a priority for López Obrador, the country may need foreign capital, particularly to shift to cleaner technologies and meet some of the Mexican administration’s climate objectives.

If the Mexican president doesn’t relent, Canada could join the U.S. in requesting a panel investigation under the dispute resolution process of the revised NAFTA, known in Canada as CUSMA.

That would add another file to a pile that already includes 17 other disputes initiated over the last two years between the three partners, as the revised agreement covers thornier ground excluded from the original NAFTA, like dairy trade and labour rights.

In other respects, the trilateral talks may not amount to much of a trade summit, despite economic integration being an obvious shared interest. The list of participants doesn’t include Biden’s trade representative, although Canada and Mexico’s trade ministers will be there, along with the foreign ministers of all three countries, who are holding their own talks.

The list of summit priorities released by the Mexican foreign office talks about “diversity, equity and inclusion, the environment, competitiveness with the rest of the world, migration and development, health and shared security.”

Dade believes the “equity and inclusion” agenda will include creating opportunities for Indigenous people.

“That’s a fraught issue in each country, for different reasons: different histories, different approaches. But each government has had a new commitment to seriously address these issues,” he said.

One sign that the leaders may not want to talk much about trade disputes: a much-anticipated report by a panel on how North American content is calculated in the automotive sector was not released in advance of the summit, despite all three countries having had it since Dec. 28.

In some loose talk reported last month, Mexican officials revealed that the U.S. argument in favour of a more stringent definition had failed to persuade the panel. But its exact reasoning is not yet public, offering the leaders an easy way to dodge any questions about it this week.

“With a summit like this, what you want is harmony and good feelings… you want friendly photos of the leaders shaking hands. You don’t necessarily want conflict,” trade lawyer Porges said.

Automotive companies in all three countries will be pleased by this panel report, because they want greater flexibility for their supply chains as they compete globally, she said.

In other words: what may appear to be a political loss for the Biden administration could help keep costs down in the sector overall, and that’s a win for consumers.

Canada and Mexico find common ground when trying to constrain American protectionism in the automotive industry. Both would rather partner than compete with the U.S. Treasury as it offers subsidies and rebates for cleaner technologies.

But Dade isn’t sure Canada’s interests fully align with Mexico’s — both countries are also competing for new investment in electric vehicles and critical minerals, for example.

“Do we have solidarity?” asked Dade rhetorically. “And if you’re Trudeau, can you trust [López Obrador]?”