The celebrations of the 400th birth anniversary of Ahom warrior Lachit Borphukan will be held in Delhi. Wikimedia Commons File Photo

The Bharatiya Janata Party (BJP)-led Assam government has geared up for the three-day-long celebrations of the 400th birth anniversary of Ahom general Lachit Borphukan in the National Capital. Prime Minister Narendra Modi will mark his presence at the valedictory function to be held in Delhi’s Vigyan Bhawan on 25 November.

The first day of the event will begin on 23 November with Union finance minister Nirmala Sitharaman inaugurating an exhibition. In the evening that day, Union law and justice minister Kiren Rijiju will participate in a cultural night.

On 24 November, Union home minister Amit Shah will be the chief guest for the plenary session at Vigyan Bhawan.

We are all geared up to make the celebration of Lachit Borphukan’s 400th birth anniversary a memorable event.

In February, former president Ram Nath Kovind had launched Borphukan’s birth anniversary celebrations and laid the foundation of a 150-foot bronze statue of the legendary commander being constructed at Hollongapar near Assam’s Teok.

Who was Lachit Borphukan?

Lachit Borphukan is a 17th Century commander of the Ahom forces. Born on 24 November 1622, Borphukan is renowned for the 1671 battle of Saraighat.

His father Momai Tamuli Borbarua was the commander-in-chief of the Ahom army.

Ahom kings ruled what is now called Assam and parts of other neighbouring states for nearly 600 years between the 13th and 19th centuries, notes Indian Express.

The kingdom witnessed many threats between 1615 and 1682 from the Mughals – first Jahangir and later Aurangzeb.

The Ahom rulers made significant counterattacks between 1667 and 1682 to regain their occupied territories. Borphukan was a major part of the battles fought during this period.

According to India Today report, Borphukan was well-versed in humanities, military skills, and the scriptures.

He also held various positions in the kingdom including ‘Soladhara Barua’ (scarf-bearer of the Ahom king), ‘Ghora Barua’ (manager of the royal stable), commander of Simulgarh Fort and ‘Dolakaxaria Barua’ (superintendent of royal household guards) of king Chakradhwaj Singha, as per India Today.

Borphukan was appointed as the commander of the Ahom army in August 1667 by Ahom king Singha.

His soldiers reclaimed Guwahati from the Mughals in November of that year.

In August 1669, Borphukan and his army trounced the Mughal cavalry in the battle of Alaboi which was fought in the Alaboi Hills near Dadara in North Guwahati. 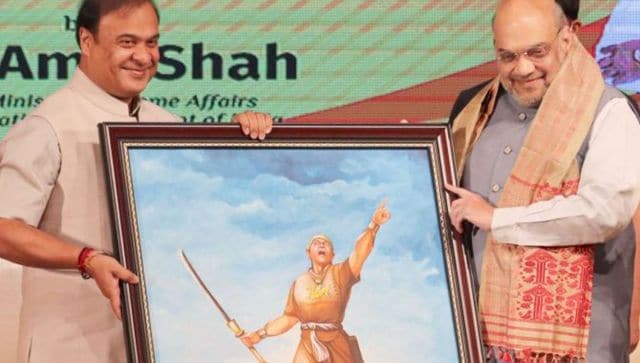 As per a paper on the website of Assam’s archaeology department, 10,000 Ahoms had lost their lives in the battle.

The Alaboi war memorial is being built at Dadara in Assam’s Kamrup district which will feature Borphukan’s statue and a 100-feet-long ‘Hengdang’ (Ahom sword), reports India Today.

In Saraighat, Borphukan was able to coax a naval battle with the Mughals on the waters of the Brahmaputra by “feigning an attack with a few ships from the front”, as per Indian Express.

According to India Today, Borphukan was seriously ill during the battle but when he heard of the Mughal fleet was making advances, he forgot about his illness and led his soldiers from the front.

Dr Jahnabi Gogoi, a Dibrugarh University professor who specialises in medieval history, describes Borphukan as an “able commander”. “He [Lachit] was an able commander and his courage is all the more lauded because he was terribly ill during the war,” Gogoi told Indian Express last year.

Historian HK Barpujari in his five-volume Comprehensive History of Assam writes on the battle of Saraighat, “The right-angled triangle of the Brahmaputra (Itakhuli-Kamakhya-Aswakranta) became a complicated tangle of boats and men battling to save themselves from drowning. The Assamese spanned the Brahmaputra by an improvised bridge of boats placed side by side. They also resorted to a wily trick, combining a frontal charge with a surprise attack from behind, that proved decisive”, reports Indian Express.

As per historians, Ram Singh had written to Aurangzeb, extolling the Ahom soldiers. “Every Assamese soldier is an expert in rowing boats, archery, digging trenches and wielding guns and cannons. I have not seen such specimens of versatility in any other part of India. One single individual leads all the forces. Even I, Ram Singh, was not able to find any loophole,” India Today cited his letter as saying.

To commemorate Lachit Barphukan, the best cadet officer of every batch graduating from the National Defence Academy (NDA) is awarded the Lachit Barphukan Gold Medal. His bust can also be found at the NDA’s entrance.