Home Middle East Why this millionaire is protesting at Davos, calling for greater taxes on... 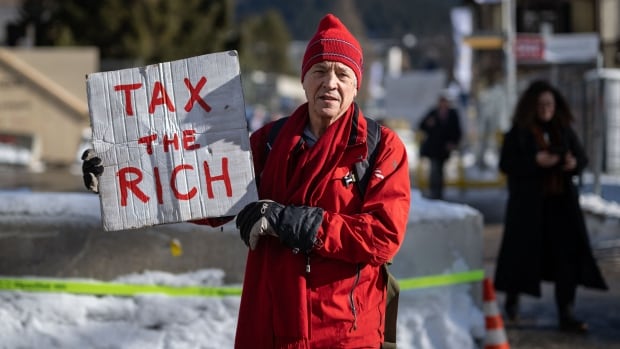 As It Happens6:28Why is this millionaire is protesting at Davos, calling for greater taxes on the rich

Phil White wants the government to take his money, please.

The self-described British millionaire is protesting outside the World Economic Forum in Davos, Switzerland, with a sign that reads: “Tax the rich.”

The forum is an annual gathering that draws hundreds of world leaders, CEOs, non-governmental organizations, and other international elites to a Swiss resort town to discuss matters of global importance.

White, a former business consultant and engineer from the U.K., could be there as a guest if he wanted. But instead, he’s opted to remain on the sidelines as a protester.

He is one of the founding members of the group Patriotic Millionaires, an organization of the ultra-wealthy calling for higher taxes on, well, themselves. Here is part of White’s conversation with As It Happens host Nil Köksal.

Phil, you’ve been standing in the snow in Davos — -18 C there today, as I understand it — [with] a hand-painted sign in your hands that reads: “Tax the rich.” Why did you decide to do that?

At Davos, we’ve got the wealthy, the World Economic Forum, it’s all happening there. And what better place to get this message through … to create some change in society?

When I look at what’s been happening in a lot of countries around the world during the pandemic, you know, we’ve seen the rich getting richer and, frankly, the poor getting poorer. And we need to do something about that.

I and some colleagues I work with are really calling for the rich to pay more share of the tax burden, and let’s ease the burden on those that are really struggling.

There was a lot of discussion throughout the pandemic about what needs to change and how we can come together to make that change. Why do you think that has not happened so far?

I was just reflecting earlier today on the fact that during the pandemic we were all talking about building back better. And we’ve built back business as usual, which seemed a real pity. As to why that’s happened, I don’t know.

[Anti-poverty organization] Oxfam published a report at the beginning of the World Economic Forum, just pointing out that during the pandemic, the wealthy captured something like two-thirds of the new wealth that was created. So it’s not as if we’re going to a fairer or more equal society. We’re actually heading the other way.

It was almost exactly three years ago to the day that we had a conversation on this program about this very topic with former BlackRock executive Morris Pearl, who was part of the leadership of Patriotic Millionaires as well. What has changed since then?

In practical terms, in terms of taxing the wealthy, I don’t think very much has changed. However, things have changed in terms of the environment we’re working in.

Governments are kind of beginning to run out of options for taxing the working people more … and so with a rising need for public services dealing with the after-effects of the pandemic … a lot of companies are finding that public spending still needs to be significantly higher. But they can’t get the revenue from working people, from income taxes and so on.

Certainly, other millionaires and people that I speak to are supportive of the message. Not everyone, obviously. You know, let’s be upfront about this. There are millionaires, billionaires, that are very financially focussed and would rather not pay more tax.

But then there are others who do some active philanthropy. And that’s obviously part way towards where we want to get. But there are a lot of millionaires and billionaires out there that … recognize that we should be contributing more to society.

What’s in it for me is the kind of society that we live in.– Phil White, Patriotic Millionaires

Is philanthropy not enough?

Because firstly, you never raise the amounts of money through philanthropy that you could raise through taxation. One reason is simply because not everybody participates.

But also — and I think more importantly — philanthropy effectively addresses some of the symptoms of the problems we have. So if I give some money away, for example … to a homeless charity or an education trust … that will make people’s lives better for a month or two, a year or two, or whatever.

But it won’t change the system or the fundamentals that caused the problems in the first place. Only governments can do that, not the wealthy. And so we need government to have the funds and the mandate to actually change things for the better. And the way of getting [those] funds is, frankly, from the wealthy.

I’m sure people have asked you this, maybe some of the millionaires you’ve been speaking to. What’s in it for you?

What’s in it for me is the kind of society that we live in.

I don’t want to live in a society where I have this wonderful, luxurious life locked away in a mansion watching movies with other millionaires. I want a society where I can walk out onto the street [and] everybody’s going about their business … and actually have a good start in life and a chance to achieve.

[I want] children …. not feel that they’re disadvantaged in some way. I want a public infrastructure that works, where businesses actually do well.

We had a conversation yesterday about food service workers in parts of the United States and the wages. They’re paid very low — in some cases just $2 [US] and change an hour, plus tips. When you hear stories like that, what’s your fear if the change you’re pushing for doesn’t come?

In terms of social and economic justice, I think we will see a greater divide.

Generally, we’ve seen rich get richer and poor get poorer. And what we’re seeing is the middle of the income scale … is being hollowed out.

The U.K., where I come from is … a very well-developed economy. And a third of our children are living in poverty. Now, how can that be right?

Do you expect, Phil, that you’ll be out in the cold again in Davos, protesting with a sign next year, and years beyond that?

I fear I will be. I’d love to say that I’m going to be out in Davos next year celebrating. I fear that more pressure is still needed.

The band of Patriotic Millionaires is growing both in the U.K. and internationally, and we will continue to apply pressure. I don’t think it’s a quick win, to be honest, but I think we will get there.

And I think we’ll get there for two reasons. Firstly, as I say, governments need the money. And secondly, because we are getting into this increasingly fragmented society where we’ve got the haves and the have nots living very separate lives. And I don’t think that’s a good way forward, and I don’t think that’s sustainable for society.