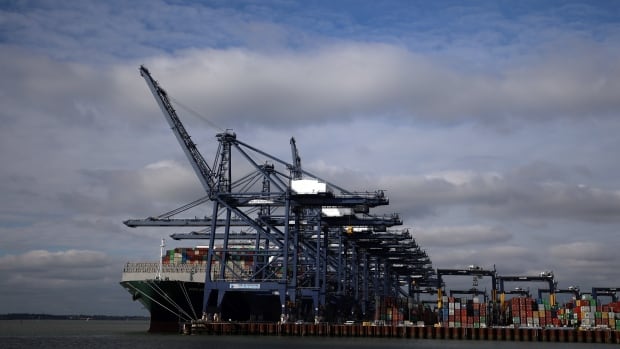 Almost 2,000 workers at the United Kingdom’s biggest container port are expected to start an eight-day strike Sunday over a pay dispute, in what would be the latest industrial action to hit the U.K. economy.

Workers including crane drivers and machine operators are set to walk off the job at Felixstowe port on England’s east coast, which handles around four million containers a year from 2,000 ships.

The news comes as people across the U.K. faced travel disruptions Saturday for the third day this week. Thousands of rail workers continued a summer of strikes to seek better pay and job security amid soaring food and energy price hikes.

Only around one in five U.K. trains was expected to run on Saturday, with some areas having no services all day. Soccer and cricket fans attending games, as well as tourists, were among those affected. The disruptions would continue into Sunday, and union leaders say more strikes are likely.

On Friday, most of London’s underground subway lines didn’t run due to a separate strike.

Port authorities, for their part, said they were “disappointed” Unite did not “come to the table for constructive discussions to find a resolution.”

Felixstowe handles almost half of the container freight entering the country. The strike could mean vessels would have to be diverted to ports elsewhere in the U.K. or Europe.

A growing number of unions are planning strikes as Britain faces its worst cost-of-living crisis in decades. The latest figures put inflation at 10.1 per cent — a 40-year high — and increasing numbers of Britons are struggling to cope with steeply rising energy and food bills as wages fail to catch up with the cost of living.

Rail workers began a series of large-scale strikes in June that grounded national train travel. They’re demanding better pay and working conditions as authorities try to reform the rail system, which has lost large chunks of its income due to the coronavirus pandemic and shifting commuting patterns.

The government and transit unions have not reached a resolution despite months of talks.