Home Health World Heart Day: Why overexercising can be fatal? 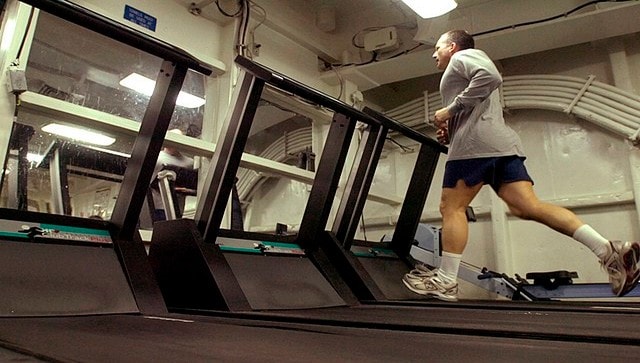 It’s world heart day today and comedian Raju Srivastava’s death is a recent reminder for us to take care of the most important organ of the body.

While it is no surprise that exercising is good for health, cardiac arrests and chest pains caused due to it are no longer unnatural. According to Cleveland Clinic, chronic and extreme exercise can lead to heart damage and rhythm disorders. People with genetic risk factors are especially vulnerable to heart attacks.

“When you’re working out, the basic concept one must follow is to avoid ‘Too much, too fast’. Too many reps, too much weight, or too much running, too soon escalating it, is not good, especially as your age progresses. Also, especially if you haven’t been very active since childhood,” said Dr Vivek Chaturvedi Professor & HOD, Cardiology, Amrita Hospital, Faridabad according to a Times of India report.

Raju Srivastava passed away on 21 September after being in the ICU for over a month. He was admitted to AIIMS in Delhi on 10 August after suffering a mild heart attack while running on the treadmill. The 59-year-old complained of chest pain and then collapsed.

It is not the first case of its kind, there have been many such instances when even pro athletes collapsed to the floor with the crippling chest pain of a heart attack. In less than a year two celebrities, KK and Siddharth Shukla, in apparently good health, succumbed to heart attacks.

But shouldn’t exercise prevent heart illnesses? It’s not as simple as that, let’s find out:

According to a report by The Indian Express, which cites Prof K Srinath Reddy, a cardiologist, epidemiologist and president, Public Health Foundation of India (PHFI), heart attacks are caused when there is a sudden blockage of blood supply in one of the coronary arteries that supplies blood to the heart muscle.

“Chronic obstruction of 70 per cent or more in a coronary artery produces angina or chest pain on exertion, since available blood supply does not meet the increased oxygen demand of the exercising body and straining heart. However, a heart attack (acute myocardial infarction) can occur when soft plaques that form in the coronary arteries rupture and cause a large clot to form. This may come without any prior warning symptoms. Even plaques of 30 per cent can rupture and set up the formation of a large obstructive clot,” he explains.

Plaques can form in the coronary arteries due to injuries to the blood vessel lining, by factors causing inflammation. High blood pressure, smoking, diabetes, unhealthy diets, stress, inadequate sleep or recent infection can do that.

Some of these events have been recorded in the early morning as there is a surge of blood pressure and blood clotting tendency is also higher in the morning.

“If a person who has some underlying coronary risk factors, has not slept well, is dehydrated and steps up to do vigorous exercise, plaque instability can lead to rupture and trigger large clot formation,” explains Dr Reddy, as reported by The Indian Express.

Is exercise bad for the heart?

Exercising is not bad for the heart, but it is essential to detect and control the risk factors that can build and rupture plaques.

Experts advise to not neglect health check-ups as well as building up stamina before going for a strenuous exercise regime.

“Firstly, if you are unaccustomed to heavy exercising, don’t start with a strenuous exercise regimen. Go slow: Start with walking briskly for 3-5 km/day in the beginning. Gradually build up your stamina. Secondly, don’t neglect your health check-ups.Lastly, do not neglect any chest pain symptoms. Get an ECG and go to the nearest tertiary care hospital to get an ECG and cardiology consultation. Early treatment saves lives,” Dr. Kaushal Chhatrapati, Interventional Cardiologist at Wockhardt Hospital said, as reported by Times Now.

How much exercise is good exercise?

Experts suggest going easy on the body while exercising and not go overboard under any condition.

Dr Ashish Agarwal, HOD, cardiology Aakash Healthcare Super Specialty Hospital said as reported by The Indian Express, “Strenuous exercise raises the short-term risk of heart attack and cardiac arrest. Thirty minutes of exercise, with adequate breaks in between, five days a week, is enough to remain healthy and hearty. Always remember to do proper warmup exercises before gym sessions and don’t try to do too much too soon.”

Who else has suffered heart attacks in the past?

In a case quite similar to Raju Srivastava’s, Kannada star Puneeth Rajkumar passed away on 29 October last year after he suffered a massive cardiac arrest while he was exercising in the gym. According to several media reports, the actor had complained of chest pain earlier.

Actor Sidharth Shukla died on 2 September last year after he started feeling uneasy and experienced severe chest pain. Known to be a fitness freak, Shukla was advised to go easy on his workout. According to a report by India Today, before waking up in the middle of the night due to chest pain, the actor went jogging after which he had his dinner and slept.

Singer-composer KK died on 31 May this year in Kolkata at the age of 53. He was in the city for a two-day concert. The singer complained of uneasiness during an event at Kolkata’s Nazrul Mancha but performed till the end of the concert. Following this, he was taken to a hotel in Esplanade where his health further deteriorated and he died before he could reach the hospital. He died of a suspected cardiac arrest.

Footballer Christian Eriksen was taken to the hospital after he collapsed after a cardiac arrest on the field during a match at the European Championship in 2021. However, after his treatment, his condition remained stable, according to ESPN.