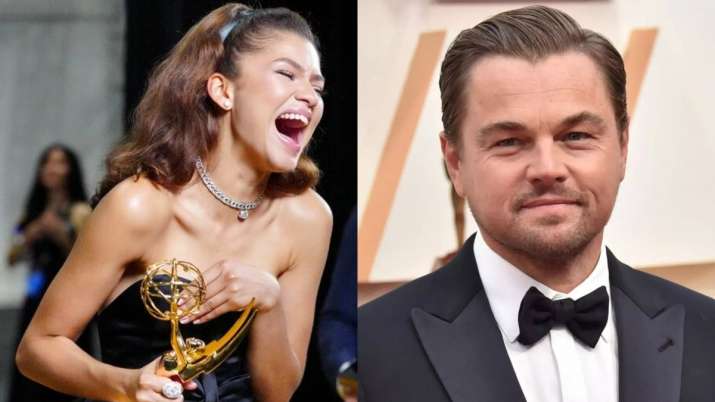 Zendaya won the Best Actress in a Drama role for Euphoria at Emmy 2022. However, a joke made by the awards night host Kenan Thompson around the actress has also gone viral on social media. The joke was targeted towards Leonardo DiCaprio and his dating choice and Zendaya inadvertently got dragged into it. DiCaprio is infamous for dating women younger than 25 and Zendaya has recently turned 26. Taking a snub, Thompson said, “Zendaya is too old to date Leonardo DiCaprio.” The joke has gone viral on social media and many have termed it the highlight of the awards night.

During his monologue, Kenan Thompson’s joke on Dicaprio and Zendaya attracted a burst of huge laughter. people who saw the live teleacst on TV also found themselves laughing. Thompson said, “Zendaya just turned 26. 26 is a weird age in Hollywood. Young enough to play a high school student, but too old to date Leonardo DiCaprio.” Even as the crowd at the Emmy laughed, Zendaya couldn’t help but hide her face as the camera panned towards her.

At the 74th Emmy Awards, Zendaya became the first Black woman to win lead actress in a drama, and the youngest two-time winner of any Emmy in history. “Thanks for making such a safe space to make this very difficult show. My greatest wish for Euphoria was that it could help heal people. Thank you everyone who has shared your story with me. I carry them with me, and I carry them with” Zendaya said holding out her trophy.

Hollywood star Leonardo DiCaprio is said to have been quietly seeing model Gigi Hadid following his split from longtime girlfriend Camila Morrone. DiCaprio and Morrone reportedly broke up “over the summer” after dating since 2017. According to Life & Style, DiCaprio has “hooked up” with Gigi Hadid, who is “exactly his type”, “a few times” since his breakup with Morrone.